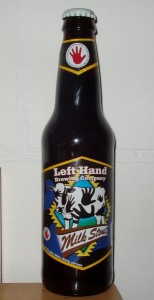 Information: (Site) “Strong roasted malt and coffee flavors build the foundation of this classic cream stout. The addition of milk sugar mellows the intense roastiness and gives this beer the most incredible creamy mouthfeel.”

I have to give a comment to the label for this beer, which I don’t often do, because it is so darn cool. Since the company is Left Hand, and it is a Milk Stout, they have designed a picture of a cow with spots that look like southpaws. Awesome. Also, this is an entirely new beer for me, so, as always when this is the case, we’ll be drinking it together.

The pour is dark, yet not quite as dark as stouts can be. The head is a very creamy foam that hangs around as a rich crown about a centimeter thick. Sadly, there really isn’t much of a distinctive odor at all. Not that standard stout nose that hits with a mocha-like bitterness, not a resounding ‘milky’ scent I was actually hoping for, and really nothing at all. Sure, there’s a subtle ‘beer’ odor like hops and malts, but really, honestly, nothing that pops. Kind of a letdown, really.

The taste is quite mild for sure. It has that full-on stout flavor that is associated with every other of the genre -smoky, heavy, slightly bitter, chocolaty, and hoppy- but as the info suggests, the milk sugar (lactose, by the way) really does effectively ‘shut off’ the overpowering ‘stout-ish-ness’ of it. If ever there could be a ‘lite’ stout, I would have to say that this would certainly be it. It’s interesting in its ‘weakness’, but, at the same time, it doesn’t give you that punch that you come to expect from from a stout, albeit described just so in the brew’s information. It’s tasty, it’s different, but similarly it’s definitely not a stout I’d go out of the way to try again. Matching with food, it could go very well with a nut-encrusted fish, or even a rich sauce-covered bird. Not bad.

Rating: * * * 1/2
A stout with milk in it. Certainly an interesting combination, but not much more.