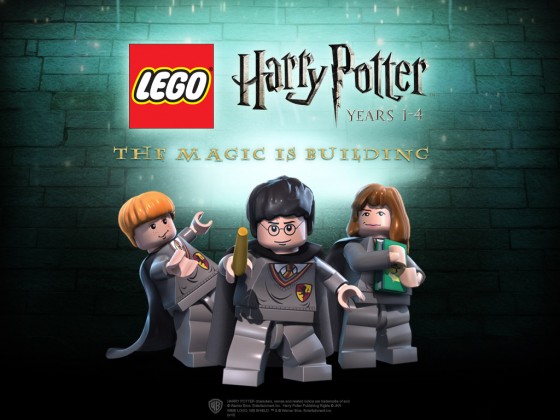 The LEGO Harry Potter Video Game has been announced, and set to release on February 24, 2010. It will be based upon the first 4 books / movies. Emphasis has been placed on drawing from both media.

For more information and updates as the release date approaches visit www.magicisbuilding.com and use the password ALOHOMORA to visit the VIP Area.

For those who have not played the LEGO Movie series of games, they are games which use LEGO versions of the movie characters to act out the scenes and plot lines of the movies. They are puzzle based games that look all cute, but are hard enough to challenge even the most hard core gamer. So far you have only seen them base these games on epic movie franchises, and they have to do this due to the detail they put into these games. In LEGO Star Wars, for example, if the person showed up in the original trilogy they are in the game. These games are so deep we can safely assume that every named character from the books will be in it. The movies are not expansive enough to be able to keep up with the game.

Details are limited at the moment but they have emphasized the detailed aspect of flying on broomsticks. Each characters skills on the broomstick will reflect that characters actual abilities. So Harry will be awesome, Ron will be ok and it will be one of the few things Hermione does not excel at. And from playing the other LEGO games, Draco will be as good as Harry on a broomstick and the other abilities, spell casting, potions, etc, will be reflective of the books as well.

The quality of these games has been impressive, so even without any big leaps or improvements this will be a great game. The Harry Potter franchise was made for this type of game