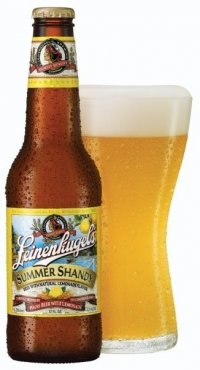 Info: “Get a taste of the freshest flavor under the sun! A Shandy is a lemonade-flavored beer, A European favorite during the Summer months. Each batch is carefully brewed using the finest wheat, malted barley, and just a hint of real Wisconsin honey.”

Though I have certainly said it before, the fact bares repeating: the 12-pack beer sampler box is such an amazing gift. With a selection of four different beers, you’d regularly have to either grab four six-packs (even I’m not that addicted) or find a place where you can make your own. But even then you wouldn’t get three of each flavor. Nice.

Unfortunately, I don’t often go for the Leinenkugel’s. I don’t know why, maybe it’s because I got fully immune to them after a year drinking nearly nothing but whe I was in college in the U.P. Whatever the case, I really need to rethink my selection options since I’ve been really missing out on some awesome brews. One in particular is this very glass I’m currently looking at: Summer Shandy. As it says right up there in the description, this is indeed a lemonade-flavored beer. Not so much so that it’s in the neighborhood of a Jack’s Hard Lemonade, but it is definitely a tart and citrusy ale to be sure. It’s about a pale as you can get and still have a coy hint of yellow. It reminds a bit of Bell’s Oberon in not only its hue, but also its rindy and crisp nose. The head is sparing and only leaves a trace of lacing.

The taste. My goodness, this is something almost magical. It is quite reminiscent of someone having dissolved a lemon Jolly Rancher into a Pilsner beer. It’s tart -but nicely so and not overtly harsh like it certainly could have been. The lemon and honey mouth feel do, ever so slightly, bring to mind thoughts of an herbal cough drop. I know, I know, that instantly dredges up fears of drinking a liquid lozenge, but it’s not like that at all: it’s a splendid taste blend that works fine for the beer itself.  The Shandy is fantastically refreshing and crisp and is such a nice change from the standard ‘fruity’ brews that seem to be inundating the stores of late. The more you drink it, the more you want to. I very much appreciate the way a ‘small-batch’ brewery like Leinenkugel’s has perfected a craft they’ve been working on since 1867; their art shows through in a well-rounded and excellent Summer selection. Try it with a burger… I did!

Lemon and honey play very well together on this beer: an excellent choice for the hot summer.