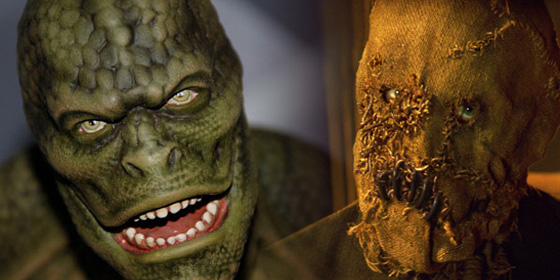 Batman Begins and The Amazing Spider-Man demonstrated that you could have a lesser known villain in a comicbook movie and still have a compelling conflict with a hero. This principle was also developed in the original Iron Man movie in 2008. As a matter of fact, these days the more iconic villains seem to be built towards in a later movie. This principle was shown in the Dark Knight and seems to be what they are working towards in Spider-Man movies as well. What other lesser known villains (to the general populace) would make potentially bad-ass opponents on the big screen? We are actually glad you asked, here are ten… 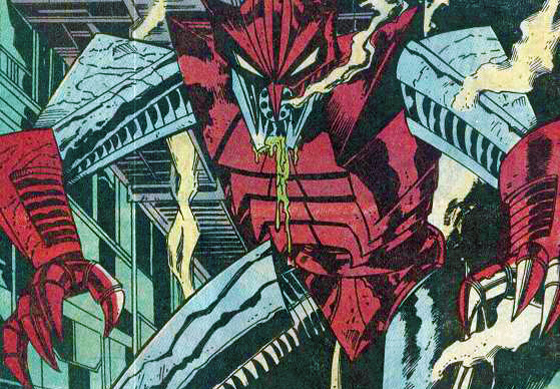 The Omnivore is actually a great concept with a horribly convoluted origin. Since the origin can be modified for the purposes of a movie, then the Omnivore would make a great villain. In the comics, you have to involve the Secret Wars and Battleworld. However, basically the Omnivore is mutated remains of spare parts of an alien technology used to repair Iron Man. In Stark’s estimation, the part were faulty because they did not work. Stark then buried them. The parts reformed and mutated into the Omnivore.

Aliens were established in the Marvel movie universe in The Avengers. A scenario in which Tony Stark tried to create a suit out of alien technology which does not work is plausible. Like the Frankenstein monster, Stark would try to get rid of it and then the monster would come back to haunt him. In the comics, the Omnivore never faced Stark but rather a hero named Quasar who just happened to find him in Quasar #8. 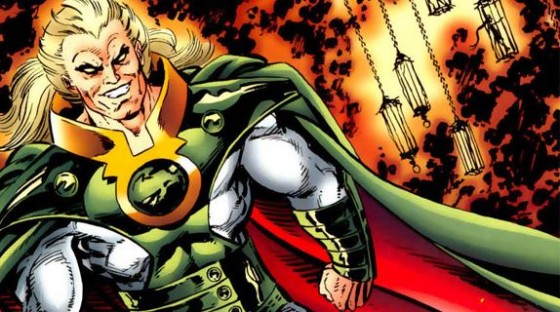 Neron is a devil in Hell. In order to fight the combined of the Justice League, you would need to have a being of truly cosmic power. It would also help if you did not have to explain the appearance of a galactic starfish. At any rate, Neron first appeared in a storyline called Underworld Unleashed in which Neron offered deals to both hero and villain alike. The ultimate challenge was to corrupt a truly pure soul. Neron could not accomplish this. The soul in question was Captain Marvel.

Given the allusions to the Justice League being like Olympian Gods, then the only real challenge for a first movie would be a representative of Hell itself.  It would also be a good way to introduce a ‘new character’ strictly for a Justice League movie. That character would be the angel Zauriel who was also a member of the Justice League for a while. 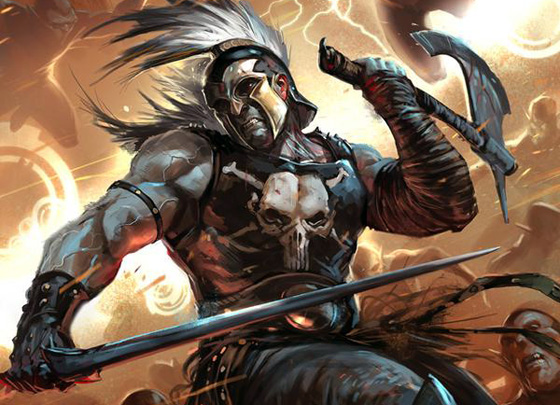 In truth, in order for the Thor movies to truly expand, Thor will have to move out of the realms of Asgard or Earth. One of the great excitements of the Thor comics is when he has to encounter deities from other mythologies. Ares, the Greek god of war, is a perfect foil for Thor. You would also have the pleasure of watching Odin interact with Zeus. Considering Zeus was played by Liam Neeson in the Titans movies, then the possibility of Neeson interacting with Anthony Hopkins as dual head gods might be almost irresistible.

Otherwise, you could probably realistically stop at two Thor movies and say everything that you really need to about the character. The cause would not be entirely hurt by an appearance by Beta Ray Bill either. 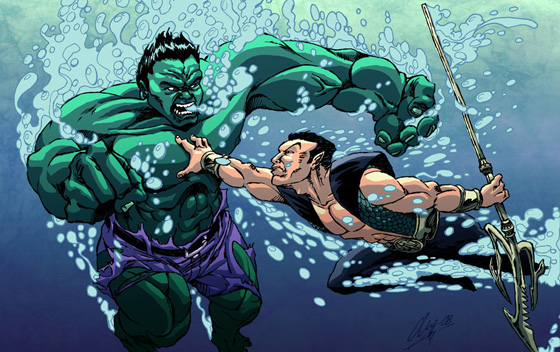 What is the plot of almost every interpretation of the Hulk on film or television? The Hulk is hunted by the government or the Army. Something goes wrong and the Hulk must defeat something with eerily similar powers to himself. The Hulk is always either hiding, running, caught or has to do the bidding of the government. Why would you not try a different plot in an upcoming Hulk movie?

The Hulk needs to a true opposite to take on. The Submariner Prince Namor would be the perfect antithesis to the Hulk. Namor is cool, calm, and collected. Namor is the ruler of an undersea Kingdom. Namor also possesses superhuman strength and can fly. By pitting the two against each other, you can show off the strengths of both of them. You would also have a much more interesting movie than ‘Hulk Smash’ and Hulk Run.’ 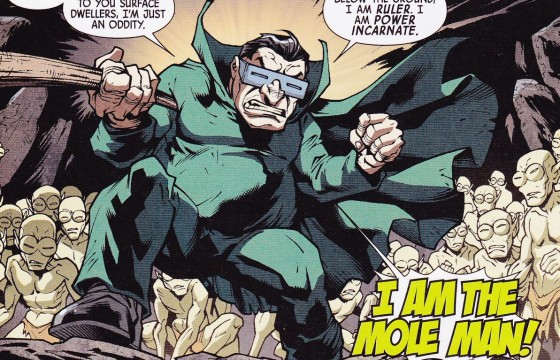 In order to make an Ant-Man movie interesting, you must have an interesting location for him to fight through. The addition of a similarly diminutive villain would add to the general ambiance. In the subterranean levels of the Mole Man’s misunderstood lair, you have the presence of all the monsters under the command of Mole Man. This would allow film makers to create a world which could potentially combine Jurassic Park with the creepiest elements of Indiana Jones’ scenes of hoards of bugs/snakes/whatever. This would give the Ant-Man a feel all its own which would be different from any other Marvel movie. With the sheer amount of superhero fare coming out, that would be an essential point to consider in making the movie. 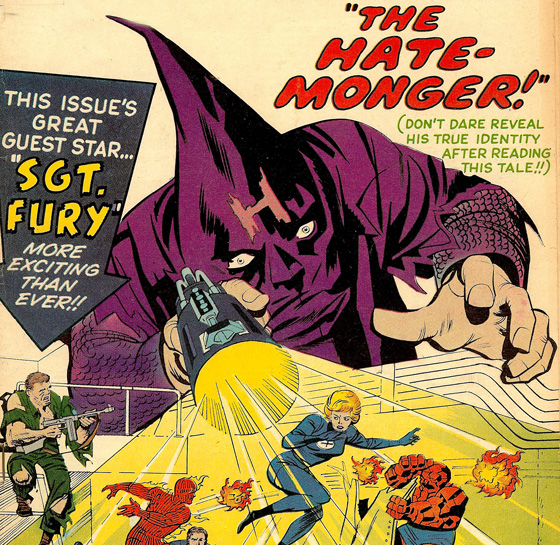 One of the main problems in the sensitive society in which we live is that it is hard to cast villains. You can hardly portray anyone as a villain without managing to offend someone. What safe villains are left especially if you are trying to make a generally family friendly movie? Nazis. What is another thing that everyone can agree is generally bad? Hate.

Any re-boot of the Fantastic Four would probably include a re-telling of the origin story. A Nazi subplot, Adolf Hitler as the Hate Monger, as well as a Hate Ray which could put the heroes in a position to fight each other would satisfy the general requirements for a successful re-boot of a franchise. Dr. Doom would be built towards in a later sequel. The current mantra is to establish the heroes first, and a Hate Monger story line would do that perfectly. 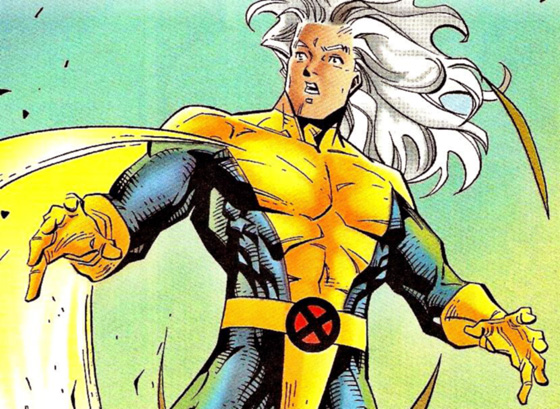 There is a hard and fast rule of comic book storytelling. Clones suck. The corollary to that rule would be not to use clones or read books that have clones in them. This is mostly Spider-Man’s fault. It is a long story and not a very good one.

Why would you want to include a clone of Magneto in an X-Men movie? Simple, you want to see a confrontation between Michael Fassbender and Ian Mckellan without the worry of destroying the very fabric of time and space itself. Joseph is a younger clone of Magneto with the same powers. Joseph also would not have the same background of prejudices as the older Magneto. The clash of powers, points of views, and actors in the final confrontation would be epic. In addition, you probably will not have a scene between the two in the upcoming X-Men: Days of Future Past. 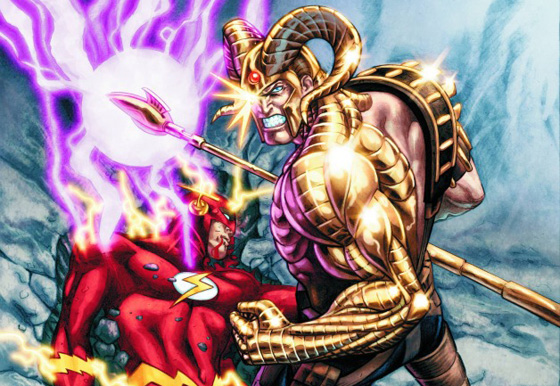 How exactly do you end Batman vs. Superman in a way that will have everyone ready to watch the third installment of the series? You take the back story of Kingdom Come literally. This would mean that the Joker kills Lois Lane after Superman marries her. This would also mean that Batman and Superman work together in the end to hunt down the Joker. In the last scene, the meta-human Magog kills the Joker.

This would end the Batman portion of the storyline and setup the epic clash between Magog and Superman in the third installment. That allows you to effectively hold on the Doomsday clash until the fourth movie in the series. It is a much better idea than another Quest For Peace. 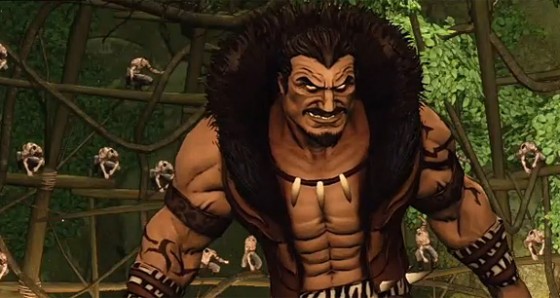 Ask any longtime Spider-Man fan about their favorite comic stories of all time and inevitably you will get into a discussion of Kraven’s Last Hunt. Kraven beats Spider-Man and buries him alive. Kraven then goes on to impersonate Spider-Man in his outfit. Spider-Man never really wins against Kraven again. Kraven commits suicide in order to prevent it. That is a story that Peter Parker has to live with for the rest of his life.

It would be amazing to see a super-hero movie in which the hero does nothing but lose and can’t do anything about it. They may never mention it in even a future movie but the story would always be there as well as always part of the character. 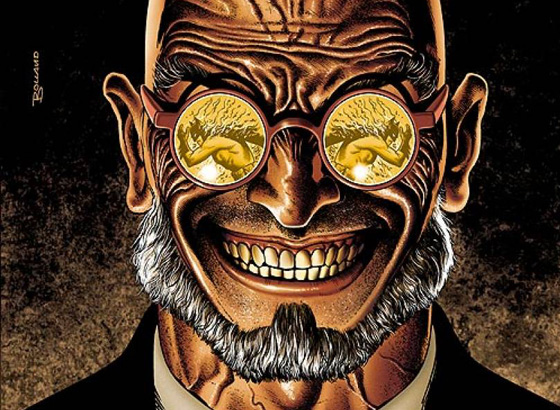 Dr. Hugo Strange is one of Batman’s oldest villains. By oldest, we mean that Strange actually pre-dates both the Joker and Catwoman. Hugo Strange has never been featured in any version of live action Batman, but was featured in the animated series. One of the big rumors attached to The Dark Knight Rises was that Hugo Strange was going to be played by Tom Hardy, but it didn’t happen.

The interesting part about Strange is that he has deduced Batman’s actual identity as Bruce Wayne. Strange also knows the value of information. Strange does not reveal Batman’s identity but instead uses it to destroy Batman in an obsessive vendetta. The kind of vendetta which is usually only matched… by Batman himself. Batman stories are at their best when they hit Batman’s actual fragile psyche, and a Dr. Hugo Strange storyline would do just that.