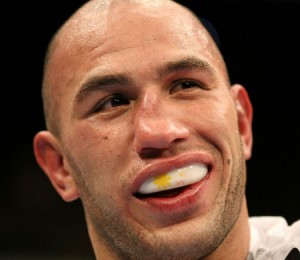 He doesn't smell what the Rock is cooking. He can't.

I was totally impressed, despite being very skeptical at some of the match making , especially after Shane Carwin v. Roy Nelson was pulled from the card due to Carwin’s back injury. On top of that, Jose Aldo was also pulled from the card, so you lost a second title match. You went from two title matches and a monster heavyweight matchup of two monsters and turned it into one title match, Chris Leban v. Brian Stann and Brandon Vera v. Thiago Silva.

It was definitely a step down, kind of like making fun of the hot girl at the bar for liking cat sweaters and then you took home a questionable-at-best bar sponge at 4am because of the whole “lack of better options” thing.

Many questions were answered for the fans, yet other story lines still need to be played out. This was everything you could ask for from an event that you paid to watch (unless you streamed it from your computer like a naughty pirate)… 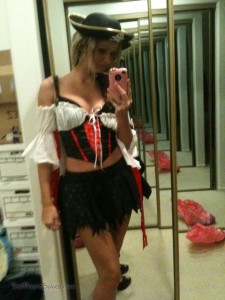 I bet she didn't steal the UFC but.. SHIVER ME TIMBERS!

I would say there’s an 85% chance that is one of our readers’ sisters.

Let’s talk MMA, shall we?

The first thing we need to talk about is the main event. Jesus tapdancing Christ. That Frankie Edgar has some chin. How he managed to escape the first round is beyond me. Oh wait. No it isn’t. Gray Maynard hits softer than my naughty pirate girlfriend.

Don’t get me wrong… Gray Maynard is an excellent fighter. I nicknamed him “Jon Fitch with testosterone” but you have to seriously look at the guy’s record. He is an impressive 12-0-1 with one No Contest finish, so technically he is undefeated but the NC came from both fighters being unable to continue. And the draw… he just couldn’t put Edgar away. Take into consideration he was on a VERY impressive eight-fight win streak between the NC and the Draw with Edgar… yet he only carded one KO throughout that streak and that was the first fight after the NC in 2007. Maynard then lucked out with split decisions with good fighters like Roger Huerta and Nate Diaz, so I really don’t know what to think about this guy.

He punched himself out, got gassed and couldn’t put Edgar away. If I was him, I’d be in the gym right now.

Lesson #1: Gray Maynard needs to learn to either knock someone out or choke someone unconscious because not finishing fights is obviously hurting his career.

On the other hand, you need to look at Frankie Edgar… who is just surviving. Honestly, it looks like he was overmatched in two of his last three fights but the kid still manages to pull out wins and you have to hand it to him. BJ Penn is (arguably) legendary in this sport and I personally thought BJ took the first fight but the judges had it unanimously going to Frankie Edgar. Then when everyone doubted Edgar, he came out and beat Penn again, the second time more convincingly.

At UFC 125, Gray Maynard seemed to look twice the size of “Fe”. (Frankie Edgar’s new nickname, or the element “iron” for you meat heads out there. Pretty creative if you ask me.) I was really impressed with his chin, his heart and eventually when he was seeing straight his boxing and take downs.

This is their second fight and Edgar is 0-1-1 against Maynard. These are the only two blemishes on an otherwise stellar record for Edgar. 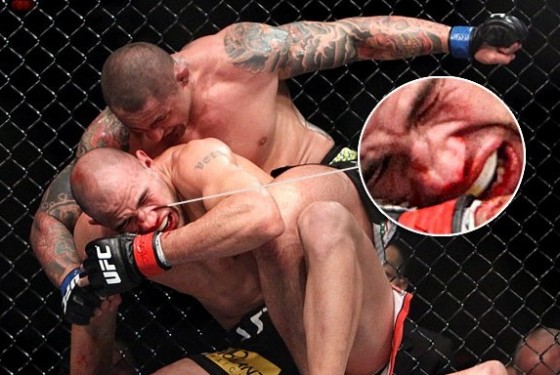 That might be the most disgusting thing I’ve ever seen.

However, during the fight Vera was pretty much embarrassed by Thiago Silva, who at one point  started playing bongos on Vera’s back. Then Silva started clapping… of course, Vera’s head was in the middle of Silva’s hands, but he was clapping nonetheless.

Lesson #3: Jon Jones ruins peoples careers and he hurt Vera so bad that he forgot how to fight.

All I’m saying is: C’mon son, the dude is playing bongos on you. Get mad!

My fourth point has to be about Chris Leben v. Brian Stann. 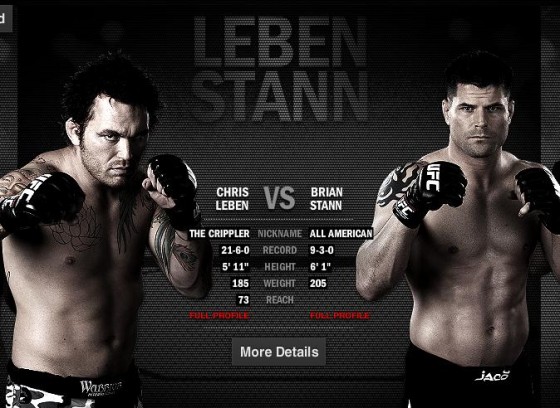 I was really disappointed in this matchup. I felt like Leben deserved more. I was so pumped Leban was being a bad ass who took three fights in seven months and won them all… well, more impressively and honestly, two fights in three weeks. Yeah…Leben won via KO…twice in three weeks. Not many UFC fighters can say that these days.

Thus I felt Stann hadn’t proved himself to deserve Leben as an opponent. Stann is a tough dude (ex-Navy Linebacker, an ex-Captain in the USMC who eventually earned a Silver Star… he has SERIOUS knockout power and a really tough chin) but he was 9-3 coming into the fight and every time he fought a remotely good fighter, he lost.

It’s like the organization WANTS Stann to be good because of his background, and I’m okay with that.

Stann ended up knocking Leben out like a little girl and Leben’s corner complained of the flu. Yeah, okay. And I suppose Leben was on NyQuil when he got that DUI in Hawaii, right? Kick rocks.

I do love him though.

I’m glad to see him looking good and winning fights. After losing two in a row to top talent in the division, Clay has come back with a three-fight win streak in which he has submitted them all (two submissions of the night, one of which was last night). He could be next in line for a title shot after Maynard v. Edgar 3 and Anthony Pettis gets a crack at the winner. So Clay would need to win one more fight, but if he looks as impressive as he has been, the cardio-machine Clay Guida could see himself fighting a five-round fight very soon.

The next fighter I want to talk about hurts my heart.

Phil Baroni (a Long Island product) was handed his walking papers after being knocked out by Brad Tavares. It was tough for me to watch it because Phil looked like he was in great shape and even may have had an opportunity to win the fight against Tavares… well, until Tavares kicked Phil right in his guido face and Phil even motioned for him to “Come on” and, you guessed it, that was the end of the god damned fight. 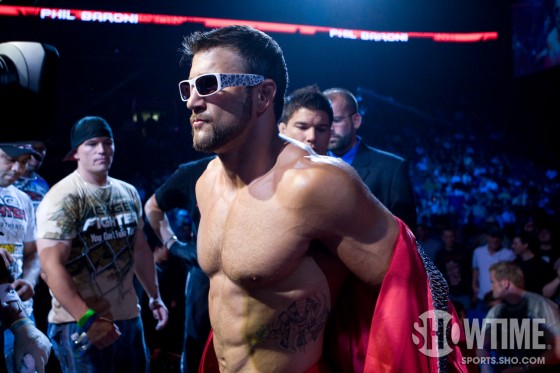 Tavares hurt Baroni so bad that Phil tried getting up and taking down the referee in an embarrassing moment in his career.

Lesson #6: Phil Baroni can’t hack it in the UFC and needs to retire before he gets hurt soon.

And that is coming from a guy who genuinely roots for Baroni.

Lastly, we need to talk about the boss.

I love when Dana White is giving to his fighters. Of course the UFC pays their fighters more money than other organizations but I love that he rewards performances in the ring so it gives fighters extra motivation to actually do something for the fans. The KO of the Night and the Submission of the Night are probably my favorite things the UFC has ever implemented.

But in the holiday spirit, Dana White not only gave Frankie Edgar and Gray Maynard the Fight of the Night honors but he rewarded them both with their win bonuses. So he spent an extra $77,000 between the both of them when really the FotN honors should have been more than sufficient. Edgar made $51,000 for showing, $51,000 for winning and $60,000 for the FotN honors ($162,000 and he retained the belt. Solid night to me…) and then Gray Maynard who doesn’t get to walk away with the belt (and would have most likely lost the fight if it wasn’t for the first round scored 10-8) earned $26,000 for showing + $26,000 for winning and another $60,000 for the FotN honors bringing him to $102,000 for the fight.

Then, on top of Dana White rewarding those two fighters for putting on such a great show (by spending a grand total of $197,000 in bonuses), he rewarded the fans by scheduling Frankie Edgar v. Gray Maynard 2.

Lesson #7: Dana White is an awesome boss who rewards you for having awesome fights with your co-workers.