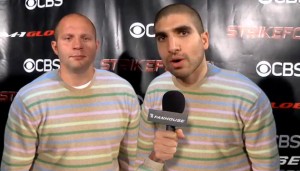 Fedor being interviewed by his twin brother, Ariel Helwani

I know I’m late to the party. Some MMA writers have really awesome lives in which they get laid often, do comedy shows for hundreds of people and make tons of money at a day job.

No? That’s just me? Well… this was an emotional roller coaster for me.

If you’ve been following my writing here at Gunaxin, you would know that I had a friend named Gian Villante fight. And I haven’t had much of a chance to talk about the subject here, but Fedor is my favorite fighter of all time. So after seeing the results, you understand why I drank a fifth of Tullamore Dew and screamed “GAMEPLAN! GAMEPLAN! GAMEPLAN” at a 55-inch flat screen for hours on end.

Alright, let’s see what we learned from the first installment of this Heavyweight Grand Prix… 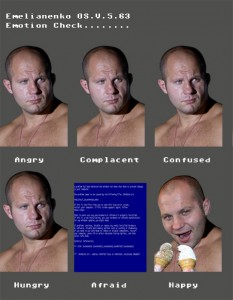 Fedor showed a little more emotion in the last fight than this..

Before I get into it, I need to laugh at Dana White’s tweet of “:)” when Fedor lost. The last time he tweeted that was Fedor’s last loss and the time before that? The Strikeforce Brawl. He’s a funny dude when it comes to that shit. On the other hand, he lashed out at a tweeter and said Fedor has done nothing for this sport. I could write 2,000 words supporting the opposite so all I have to say is Dana should at least respect fighters he doesn’t employ… especially walking Hall of Famers. In the grand scheme of things, they are working for the same team which is “Team Legitimize MMA World Wide Including New York So Hugh Can Watch MMA At Nassau Coliseum Which Is Five Minutes From His House I Mean They Have Monster Truck Rallies Why Not Fighting?”

Anyway, Fedor didn’t look good. Rashad Evans made mention it was because his priest was late or didn’t show up or something I wouldn’t understand because I don’t employ my own priest. However, Fedor looked like he was trying to counter punch and it was a terrible game plan because Silva has like 40-50 lbs. on him. This time he didn’t “get caught” in a “lucky submission” by a 2nd-degree BJJ black belt (/sarcasm). He was physically man-handled by a dude nicknamed Bigfoot. Frank Shamrock’s expert analysis was “Fedor would be in trouble if he heads to the ground.” 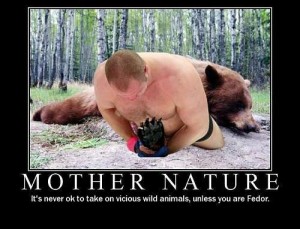 TRUE STORY. Fedor needs to get back to training like this.

Yeah. Read that again. What the fuck, Frank? Fedor has finished more than 50% of his fights via submission. Twice as many submissions as knockouts. Against a dude who weighs 264 lbs. after taking a giant dump. I think the “hang and bang” gameplan Fedor was trying to go with was awful. Then he got caught with Silva on top of him giving him the “rape choke” and Fedor couldn’t escape those big bear paws around his throat and those deadly punches to the forehead and eye.

The problem everyone has with the fight is that the fight was stopped. Fedor did want to continue fighting but this time, unlike his first fight, the doctor needed to stop the fight or he would have been severely injured. He wouldn’t have seen any hooks or jabs to that eye and it could have gotten very dangerous. The people saying, “Who knows?!? He could have won!”, are stupid Fedor jock sniffers. Could he have came back from adversity? Well, yeah. It’s fucking Fedor. Anything can happen. You see what happened in Silva v. Sonnen? Crazier shit has happened.

Lastly, Fedor is 34-years-old. He’s lost once due to being beaten. Doctors had to stop the other two fights. The dude is practically a God in my eyes. He’s a warrior but he might need to seriously considering giving it up because the first time was “lucky” and the second loss looked like a massacre. I’m just saying “retire” because if that fight kept going like Strikeforce and Scott Coker prayed it would, he may have been watching cartoons with his daughter with one eye.

Oh and one last thing… Jim Rome can suck it.

I really can’t take all the fair-weather MMA fans coming out of the woodwork with their shitty opinions and saying Fedor sucks. He hasn’t lost in a fucking decade. Name any other athlete that can say that in any sport, ever. In that decade he went 26-0-1. COME THE FUCK ON!

-Chad Griggs LOVES being an underdog. Go ahead. Count him out. He just TKO’d Bobby Lashley (one of Strikeforce’s biggest Heavyweight prospects) and my boy, Villante in back to back matches. I don’t understand why Villante, the ex-All American high school wrestler and linebacker in college, decided to stand and bang with a proven striker in his Strikeforce debut…but the gameplan was not what I would’ve preached in camp. Gian’s high kick worked nicely but his cardio wasn’t great and he attempted a second rather than a flurry of punches or takedown/ground and pound which probably cost him the fight. Anyway, Griggs needs a bigger fight and Villante might need to move down to 205 lbs. where he is the #2 prospect in the world according to Bloody Elbow.

–Shane Del Rosario is awesome. Del Rosario is 11-0. He has NEVER been to a decision. I don’t know how to promote him any more than that. He needs to be in the big fights and Griggs might be a good match up for him.

–Andrei Arlovski NEEDS to retire. His jaw is made of crackers and loose leaf paper. Chuck Liddell sees him fight and is like “Damn!”

–With Fedor out, you are dumb if you think Alistair Overeem is losing in this tournament. That’s it.

This tournament is really awesome and the MMA has been on point lately. I’d love to hear your Fedor thoughts because EVERYONE seems to have them. Haha, you thought I cared? Aw that’s so cute. Don’t write anything about Fedor or I’ll find you all like Jay and Silent Bob and kick the ever living shit out of you.

Oh well, time to play catch up. YOU CAN’T KEEP ME OUT OF FIRST FOREVER, MMA LEAGUE!

P.S. GINA CARANO IS BACK! SO YOU GET THIS!