Media > Celebrities > Let’s All Go With The Flo!

Let’s All Go With The Flo! 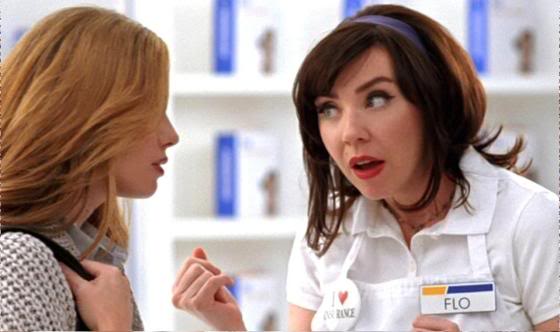 I’ll be willing to bet that, if you’re even a little bit of a TV watcher, you’ve seen Flo. Flo is the newest ‘spokes-woman’ for Progressive Insurance, and she stands out in the blue-and-white backdrop in her own stark-white smock and pants with her raven locks and the caked-on red lipstick… she is adorable! Say what? Are you completely bat-shit crazy? (you might be asking yourself) Well, maybe a little, but I’m certainly not the only one. As it seems, Flo, the personality of actress Stephanie Courtney, has garnered herself quite 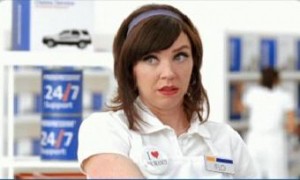 the cult following. Her Wikipedia entry says, “Facebook said “Flo the Progressive Girl” had well over 100,000 fans, multiple websites were dedicated to her, and she was popular at MySpace and Twitter and various internet forums.” That’s something considering she’s just a face (an albeit pretty one) on an insurance ad. So what’s the big deal? Maybe it’s her indelible charm, perhaps it’s her bubbly personality, or it could be her quick wit and snappy sense of humor. Well, whatever it is, she’s become damn popular and certainly out-does the rapidly declining Geico gecko. Let’s also assume that some of you might never have seen Flo on TV (for some odd reason) and thus have no clue to whom I refer. If that’s the case, or, if like me, you find her damn cute and enduring, here’s ten of her finest commercial moments. Enjoy! 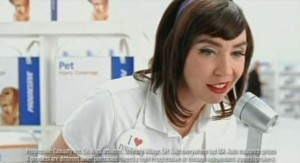 Flo Assists With a Guy and His Watch

Flo’s Customer is Far Too Excited

Flo Gives Power to the People

Flo and the White Whale

Flo and the Tricked-Out Name Tag