Let’s Have a Dollar Store Halloween 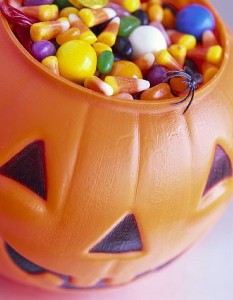 I love me some Halloween. It is, behind Christmas, probably my favorite pseudo-Holiday (yes, I know Christmas is a real holiday. Move on). No other superfluous ‘special’ day revolves completely around your ability to outright beg dressed as something you’d normally not be caught dead looking like. Well, unless you’re one of those metallic-robotic homeless folks who hang around places like San Francisco, then, well, I guess it is like every other day. But I digress.

Halloween is all about trying to keep the anxious dead at bay while at the same time prancing around your neighborhood streets dressed as a plastic Captain America or a hooker Furry. But aside from dolling up yourself, you also need to deck out your home and accompanying yard. But, in this economy it’s a far bit tougher than it used to be and very few of us can afford to turn our entire lot into a fully-functioning haunted house.

So this is where your friendly city Dollar Store can come in particularly handy! Look, we all know the Dollar Store tends to stock crap all over its shelves. Yet, hidden in its many subtle layers can be found treasures of the finest pedigree! No, that is entirely untrue. Here are a few of the wonderful Halloween goodies I dug up, and I’ll leave it up to you to decide whether or not they’re worth the money sent. Ya know: that whole dollar.

Spooky!
Sort of, kind of, creepy candles. Sort of.

It looked on the shelves like I was mere moments short of getting my hands on an entire collection of these gems, but I had to settle for only two packs. Coming in packages of three, I found the ‘Vampire’ and ‘Scarecrow’ varietals with the former being slightly opened. It’s not like I was going to put them on a shelf and collect them to the point of hoarding, so I didn’t really give a shit. What actually caught my eye was two main things. 1: The design of the figures is particularly unsettling. The ‘Vampire’ looks like the visage of a little boy with a hastily slapped-together costume, and the ‘Scarecrow’ resembles a children’s book illustration. So, to that end, not scary. And 2: The wicks are inexplicably in the center of the candles much akin to a Votive-style, which, I suppose, one could argue that these are. Either way, they just scream fire hazard and therefor they are immediately going in my Jack-O-Lanterns! We’ll just see how quickly my porch can become a Halloween nightmare. 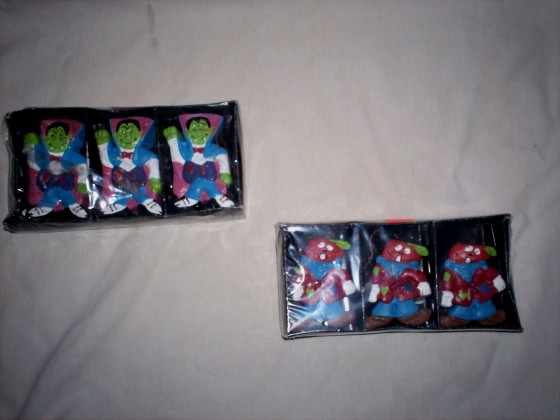 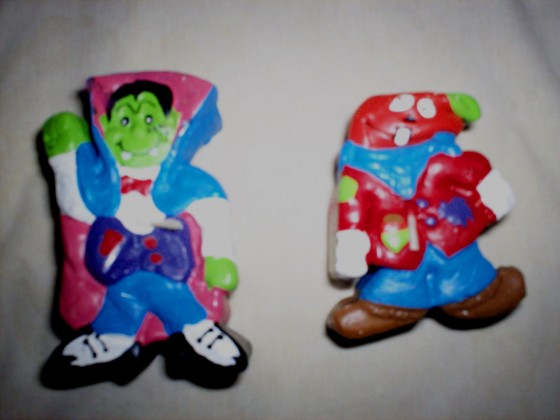 Boo!
A plastic flask? What the hell kinda message is that?

Oh this is just sadistically ridiculous. I can count on one hand the names of the costumes available where one would conceivably need an alcohol flask: Bum, Drifter, Alcoholic, and Homeless Transient. Now, I understand folks have Halloween parties at which the whole point is to wear incredibly obnoxious costumes (hey, I was a zombie whore once) and swig back as much alcohol as one human full of various candies can handle. This is all well and good. But I found this ‘Skull Flask’ by the children’s adornments. What the hell? Who’s parents are giving their children the ability to dress like anyone requiring the addition of a damn flask! Well, besides those who flagrantly don’t have an active hand in raising them. I’m talking about normal, standard parents! Damn I am so making too much of this! I need a drink. But first I need to wash the Kool-Aid out of this prop flask… 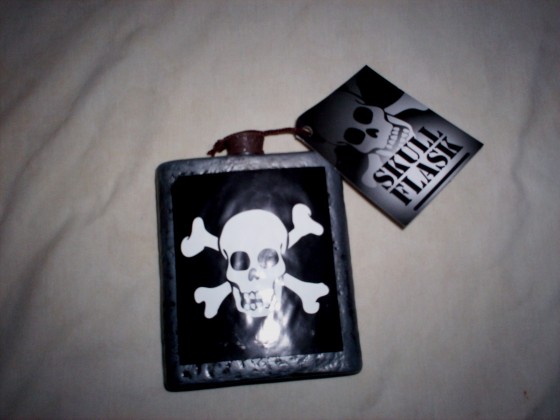 Blood Drinker!
Ya know what would go great with my Pumpkin Colada?

There were literally a dozen different sets of these Halloween straws, but it was the skeleton ones that really caught my attention. Hey, who doesn’t love straws, right? Nothing advertises laziness so definitively like someone having to bypass the whole lifting the glass thing and giving in to a siphon. Well, I guess it does take a little effort to combat gravity and outward pressure enough to get the liquid through the straw, but still. Well, be that as it may, I love these straws! They’re plenty fun, adorned quite nicely with very cool looking silly skeletons, and (here’s the best part) reusable! That, kids, is recycling! And who knows, you just might want to use one of these babies while you’re toasting Armageddon in 2012! So very appropriate. 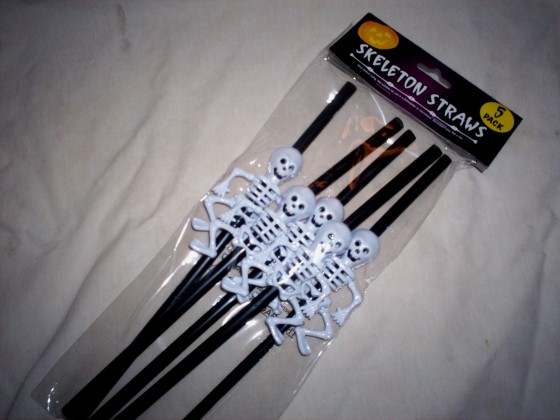 A Little Death
Great For Those Hamster Mishaps

My mother-in-law just had her dog shuffle this mortal coil not two weeks ago, and had I known these little beauties were available at the Dollar Store, I’d have totally made it my tacky condolence gift! Yes, I have asshole tendencies. I can admit that. What possible other reasons could there be for having grave stones this damn small? Is the order of this year’s Halloween to have a thriving Pet Cemetery in your backyard? Or maybe it’s to jot silly little epitaphs on them like ghoulish Fortune Cookies and hand them out to unsuspecting Trick-Or-Treaters? That’s a grand way to get your dumb ass egged. “Happy Halloween, little boy! Here’s a Headstone For When You’re Hit By a Bus!” Sick bastards! Well, just in case, there are several different types all with nothing on them, so, bury your science experiments in style. Weirdo. 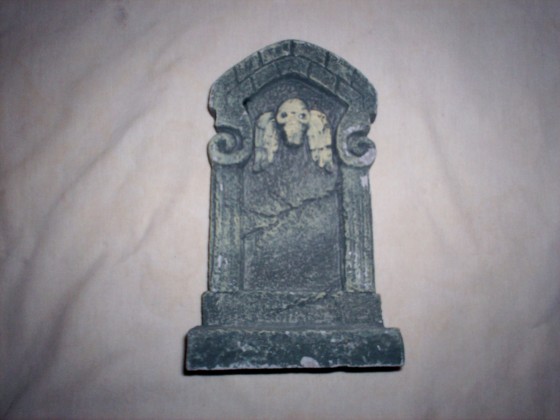 Monster Mash
Awesome in a shitty sort of way.

And now for the Piece de Resistance: Universal Movie Monsters ‘Creepy Classics’! Oh baby! Well, it’s not super exciting, unfortunately. I mean, this is Dollar Store fodder after all, so you are really getting what you pay for. Ya know, for a dollar. But still, these things are pretty nifty! They are, as the packages advertise, Thumb Toppers. Well, thumb puppets for kids with skinny, bony thumbs with no discernible knuckle structure, but you get the idea. I actually didn’t open them since I have future plans for them, but they are definitely shitty Chinese works of sweat-shop garbage obviously painted by a blind mental patient. Yet, for all intents and purposes, they look pretty decent. But the real special points are on the reverse sides of the pack where each feature an actual mini-movie poster from the specific character! Classy. They end up being about playing-card size and that’s pretty cool for collectible purposes. I managed to snag five of them, and there might be others, but I couldn’t find them. Other than that though, I’d keep these way out of the reach of children. Who knows what kind of tainted bird-flu paint is on these damn things. 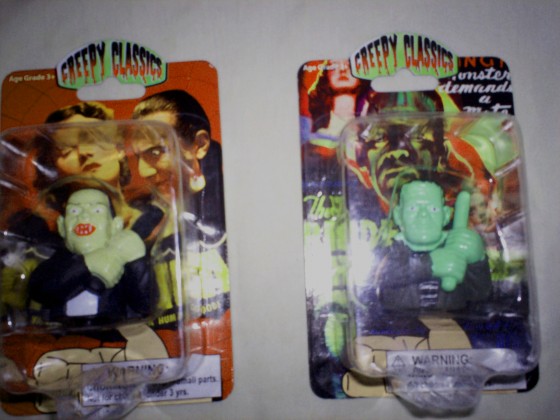 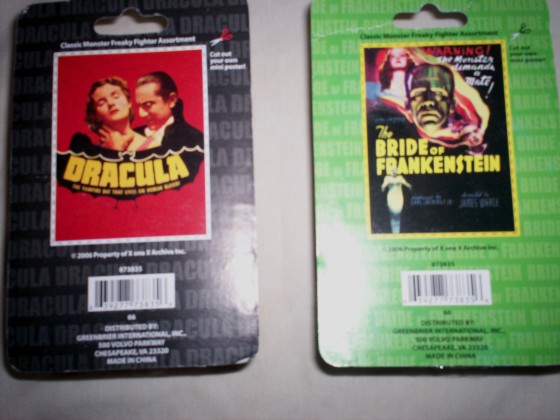 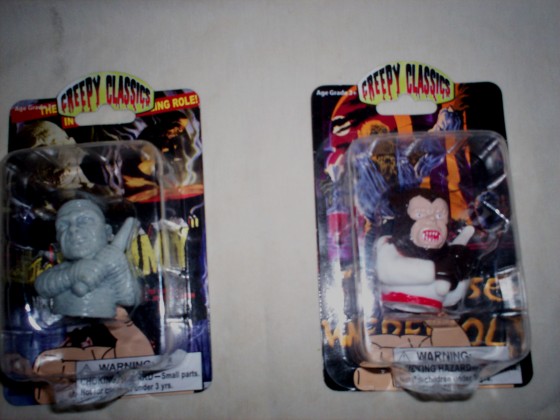 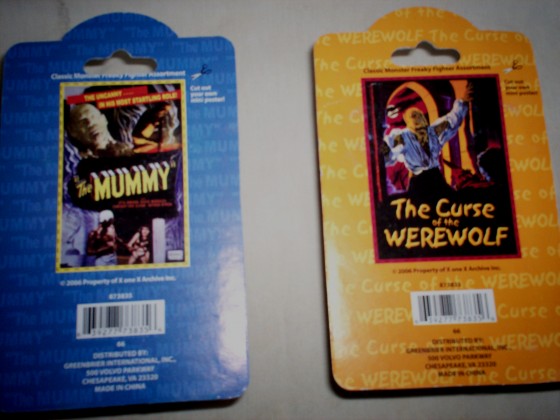 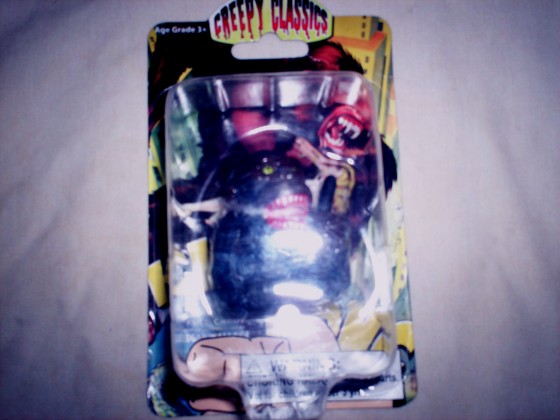