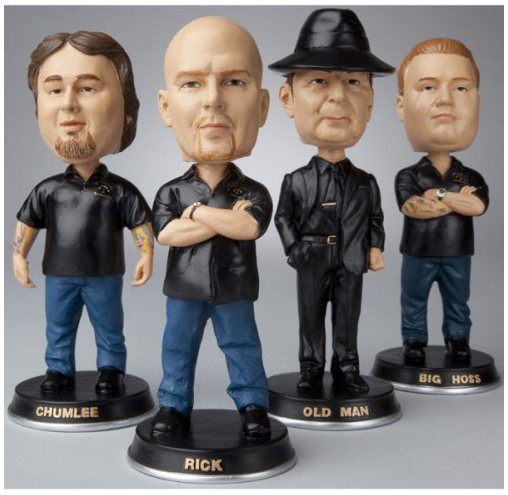 Considering the success of The History Channel’s ‘reality’ show Pawn Stars, it should come as no surprise that there are now bobbleheads of the main characters. You know, because everyone loves that show just enough to want to buy a Chumlee, Rick, Old Man and Big Hoss bobblehead for our mantle.

But they didn’t stop there. The History Channel is also selling LIFE-SIZED figures of these characters for $9,9950. They are listed as being 6 feet tall.

I spoke with a salesperson at The History Channel, who said she hasn’t gotten any orders for the life-sized figures yet, but people have asked if they can make payments (which isn’t allowed).

I was also given the number to Gold & Silver out in Vegas but opted not to even inquire as to why they decided to make these items. It just doesn’t seem logical. If someone brought a life-sized bobblehead of anyone into that shop, the Old Man would offer $100, Rick would offer $500, Corey would offer $1,000, and Chumlee would offer $15,000. Other than Chumlee, who couldn’t even afford it, what makes them think anyone would spend the price of a car for even a single figure of one of them?

Perhaps the success of the show has gone to their heads, perhaps they really think they can make money off of these. Maybe the markup is significant and selling only a couple would make it worthwhile. They’re good at their business and I’d like to think that this is really a good idea. Now only if Dog the Bounty Hunter would do the same.

The regular-sized bobbleheads are available on The History Channel’s Pawn Stars store for $19.95 each. Order the life-sized figures by calling 1-800-933-6249.