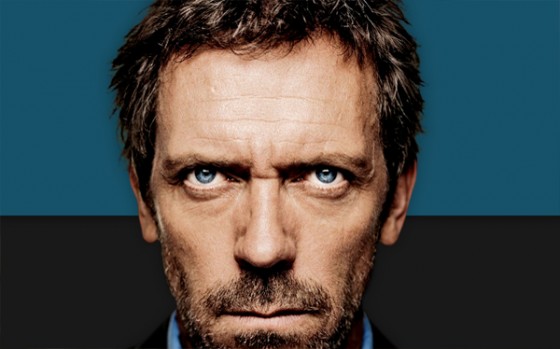 Do you watch House but none of the other countless, boring medical dramas on TV? Are you actually interested in seeing the inner workings of a hospital? Do the complex relationships of exceptional people under exceptional stress excite you? Do you enjoy seeing lives saved?

No, of course not — at least we don’t. We like the show because we like the guy. Dr. House is a genius, but we don’t like geniuses. Geniuses are boring. We need someone interesting. Someone we can relate to; even sometimes feel superior to. And if he happens to be a genius, even better.

We don’t like Dr. House because he’s a doctor or a genius. We like him for his seemingly incompatible combination of personality traits.

Dr. House is rude. He tells dying people that he doesn’t care about them. He chooses medical procedures that involve maximum pain. He only has one friend and doesn’t treat him very well.

When assholes are strictly assholes, nobody likes them. But when an asshole has more to his personality than just being an asshole (see the other reasons below), then he can be quite likable. 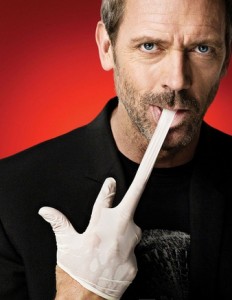 Of course, know-it-alls who are always right are definitely not likable. They can be downright annoying. What makes Dr. House different is that he’s right not because he’s smart, although his intelligence is where the idea first comes from. It’s because he takes huge risks based on hunches. It’s something us mere mortals would like to do. However, we are usually wrong. 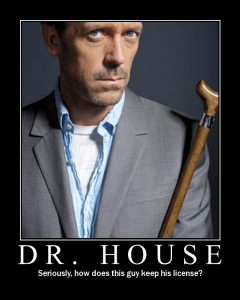 So he’s an asshole and he’s a genius, but Dr. House would be unrealistic or annoyingly enviable if he were happy and successful too. At the end of the day (literally and figuratively), the guy is a loser. His perfect evening is drinking alone in front of the TV. He only has one friend, a work friend, and he never dates. He invites a never-ending parade of personal problems into his life. And of course he suffered a serious leg injury that impairs his ability to walk. Everyone likes a character for their flaws -- we can look down on them, pity them, and feel better for it.

His numerous vices can be seen either as flaws or empathy-producing escapes from the stress of his life. He is addicted to Vicodin. He frequents prostitutes. He drinks to excess.

But perhaps his most likable “vice” is the mindless entertainment he enjoys: monster truck rallies and soap operas. If he were a highbrow intellectual we might think him a snob. But he enjoys bad entertainment just like the rest of us. 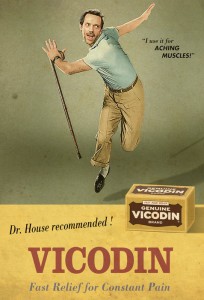 So the above four reasons add up to a guy we may pity or be intrigued by, but don’t necessarily like. We need an outside opinion. His friends and co-workers don’t offer it; they usually respect him and are sometimes in awe of his talent, but they certainly don’t like him. Even his best friend Wilson keeps him at a distance.

Our irrefutable outside justification for Dr. House’s likeability is that at almost any point in the show’s eight seasons, a super hot woman has been attracted to him: his assistant Dr. Cameron, his boss Dr. Cuddy, a Russian prostitute he married, and very often the most attractive patients.

With all his flaws, fine women still want him! How can you not like the guy? 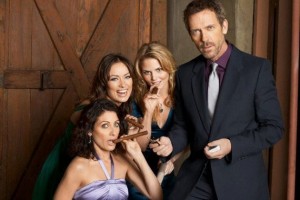