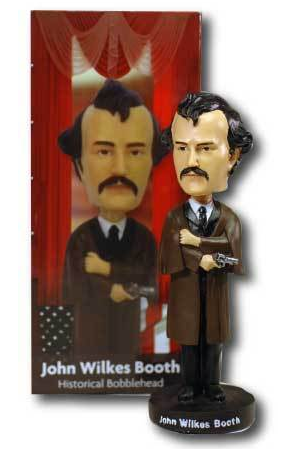 Major bobblehead news broke this week when the Gettysburg Museum and Visitors Center pulled a John Wilkes Booth collectible from its shelves. Booth, who assassinated President Abraham Lincoln on April 14, 1865, nearly 150 years ago, is not the most popular figure in American history, and it’s apparent that not enough time has passed to make it acceptable to immortalize this character into a wobblin’ mantlepiece (In Gettysburg, at least).

Sure, figures of other historical villains are already lining shelves, such as Vlad the Impaler, Kim Jong Il, and Snooki. Each one got it’s share of criticism but ultimately the free market decides who buys what.

While the item has been pulled from the Gettysburg giftshop, it’s on backorder for a number of independent sellers on eBay and Amazon. Considering the attention it’s already gotten, it’s possible that collectors will stockpile these under the assumption that it will soon be discontinued before increasing in value.

By the way, the sculptor of this item defended his decision to make it, claiming he uses his self-designed historical figures for educational purposes. That’s the answer to the educational problems in the U.S.: They need to be taught with bobbleheads.

The John Wilkes Booth bobblehead comes in box that resembles the inside of Ford’s Theater, where Lincoln was assassinated. No word yet when the Lee Harvey Oswald bobblehead will be unveiled.