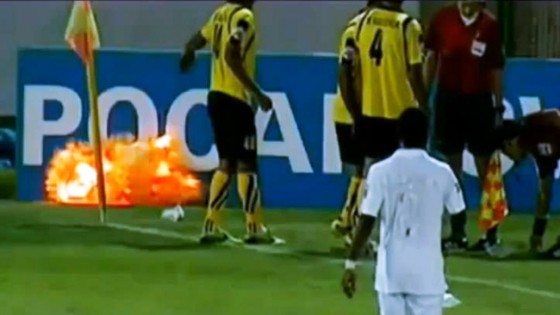 At Gunaxin we understand that some people take sport pretty seriously, we’ve yelled our fair share of obscenities at the TV in our underwear. But someone cranked that shit up to 11 and broke of the handle during a Asian Champions League quarterfinal soccer match when they threw a live grenade onto the pitch. That’s not anger, that’s attempted freaking homicide, what does that even prove? Just check out the video below and see how close some player were to Lieutenant Dan-ing their way through those pearly gates. Because, holy shit it was close.

It may not surprise you to learn that this game happened in Iran, a country that’s not exactly known for its stability, especially not now it’s international news that they have soccer games interrupted by tank testicles. What will surprise you though is that the player who were literally seconds away from spending the rest of their lives scratching their balls with a claw as a best case scenario, finished the god damn game. And the official website doesn’t even mention the fact A FUCKING GRENADE WAS THROWN AT PLAYERS! How hardcore are the people in that league? they came face to face with the Grim Reaper and said, “whoa, we got a game to finish here homie, step off” straight to his bony face. We officially lose the right to say sports stars have an easy job now.

The only thing we’re more in awe of is that fact Adel Kolahkaj (the player who picked it up and threw it away) was able to complete the game without injuring other players with the set of brass balls he clearly has tucked in his shorts.