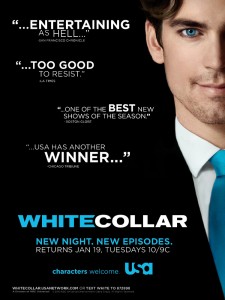 When it comes to light, breezy procedurals, no one does it better than the USA Network.  Starting with Monk and moving onto shows like Psych and Burn Notice, USA has continued to offer up fresh and fun hours of television and they continued that tradition when the network unveiled White Collar last fall.  Don’t just take our word for it, check out what the critics are saying to the right. At first glance, White Collar might seem to be a knockoff of the Spielberg film Catch Me If You Can, considering it’s about the world’s greatest forger and con man forming an unlikely bond with the only man smart enough to catch him.

However, settle in and watch the show and you’ll realize that while there are certainly similarities and maybe even a few nods toward the movie, White Collar stands on its own as a show that’s just stylish and cool.

Matt Bomer (aka Bryce Larkin, of Chuck fame) brings a lot of swagger and with his blue eyes and charm is reminiscent of a young Rob Lowe, only without the sex scandals, in the lead role of Neil Cafferty.  Cafferty is the world’s best, and probably most handsome art forger/con artist who lives the high life until he’s caught – twice – by the only man apparently capable of doing so.  Motivated by the idea of a little bit of freedom and a whole lot of not wanting to go back to prison, Cafferty agrees to lend Burke his expertise to track down and catch his fellow white collar criminals.  Naturally, he’s got his own reasons for wanting to be on the outside, too.

While Bomer does a nice job in the starring role, Tim DeKay takes what could easily have been a thankless role as FBI guy Burke, holding Cafferty’s leash while also forming a pretty genuine bond with the felon he seems to both respect and actually like.  While the role of the straight laced government agent is often a cliche, DeKay injects the character with humor and some emotional weight that keep Burke from becoming the stereotype you often see in movies and on TV.  Here’s a character who doesn’t just take Cafferty’s crap and barbs.  No, he gives as well as he receives.  Of course, you’d probably be in as good a mood as Burke if you were smart enough to take down the likes of Cafferty and still find the time to get yourself a smoking hot wife, played by Tiffani Thiessen.

With White Collar returning this week to USA, right now’s a pretty good time to catch up on one of the most fun shows to debut in 2009.  Plus, you can win stuff, and who doesn’t love that!? Here’s what USA has to say:

USA Network’s new hit series is back with all new episodes on an all new night. Don’t miss the return on Tuesday, January 19 at 10pm/9c! The season premiere picks up after December’s cliffhanger as Neal must infiltrate a company of corrupt Wall Street brokers to preserve his deal with the FBI. When Peter is forced to go undercover alongside him, a discovery is made that could change their partnership forever. Become a fan on Facebook, Follow on Twitter, Visit The Official Website for your chance to WIN a new Taurus (beginning 1/19).

To help promote the show, we have a White Collar Gift Bag for one lucky winner. It contains…

To be eligible to win, you must be in the United States, and complete just two easy steps:

And just to get you primed for all new episodes of White Collar, enjoy this clip from the season premier of one of the coolest shows on television: