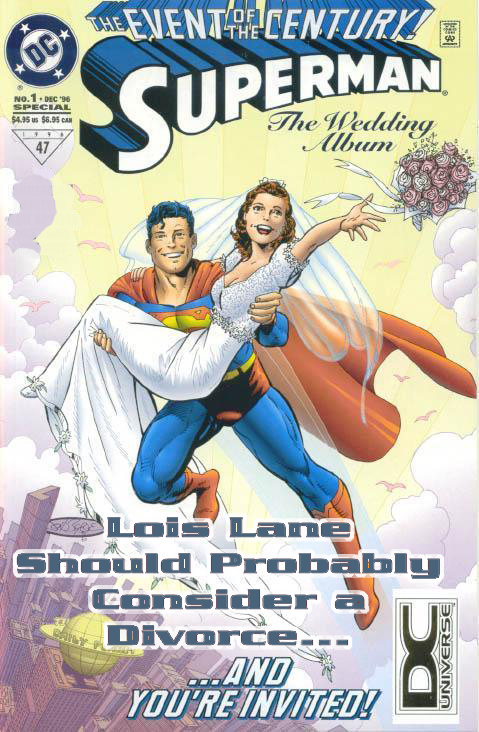 Previously on Gunaxin we presented our well-reasoned case that Jimmy Olsen, boy editor, is actually worse than six robot Hitlers. Continuing this trend, we’d like to take a look at the life of Superman’s girl friend Lois Lane.

Around the same time that Jimmy Olsen earned his starring role Lois Lane was given a spin-off in the hopes that it would attract female readership. While we’re sure the book was successful to this end it also had the unintended consequence of revealing that America’s favorite comic book couple was flimsy at best and horrifying examples of spousal abuse at worst. Can the world’s greatest hero also be the world’s worst lover? We think so, and to prove this point we present to you ten solid reasons why Lois Lane should probably consider divorce. 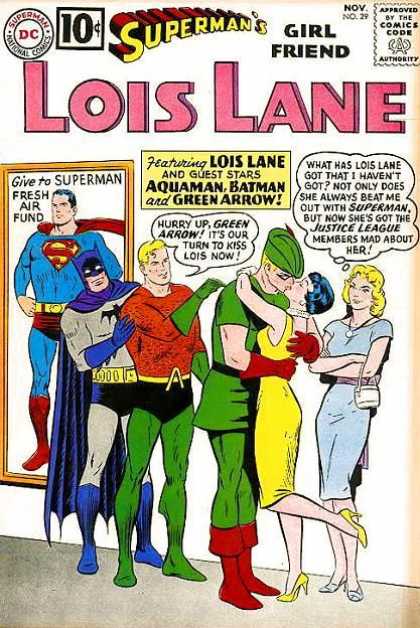 A good indicator that your relationship is more than a tad rocky isn’t when you have a line of men who aren’t your significant other waiting to kiss you, but when said line contains Aquaman. When you’re willingly pressing your lips against a man who lives in the waste of dolphins and chemical plants we think it’s safe to say that no, you’re not terribly fond of your other half.

The really sad part of this is that Superman is completely unaware of this. If he were, Batman wouldn’t be standing their with his creepy rape-face because brutalized corpses generally don’t stand very well. Oh sure, Superman’s out and about cleaning your air now, but how do you think he’s going to react when he sees you locking lips with the B-Team later?

Reason #2: Superman’s A Bit of A Player 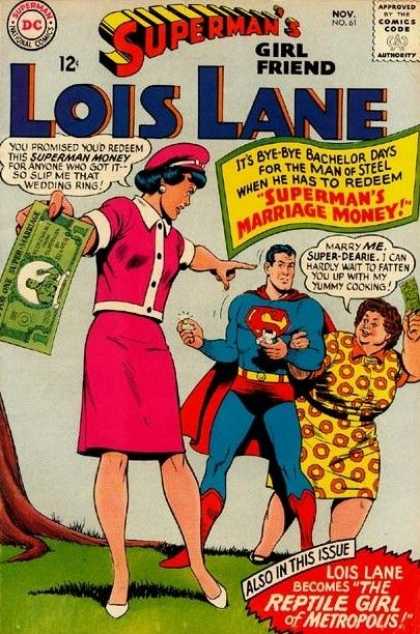 Lois Lane isn’t exactly a champion of feminism. Rather than prove herself as a self-reliant individual she spends more than half of her own comic series trying to force Superman into tying the knot through wacky hi-jinks and and tricks that make a game of Mouse Trap look like a damn labyrinth. By the same token, Superman spends just as much time trying to get in the panties of ladies who aren’t Lois Lane. In this issue he’s trying to grab some quick celebrity sex by printing “marriage money” without ever realizing that his alleged girlfriend might find his actions upsetting.

Still, the fact that he’d rather take Two Fat Ladies there over Lois Lane pretty much says it all, yet somehow she still manages to miss the hint.

Reason #3: Superman Tried to Murder Her 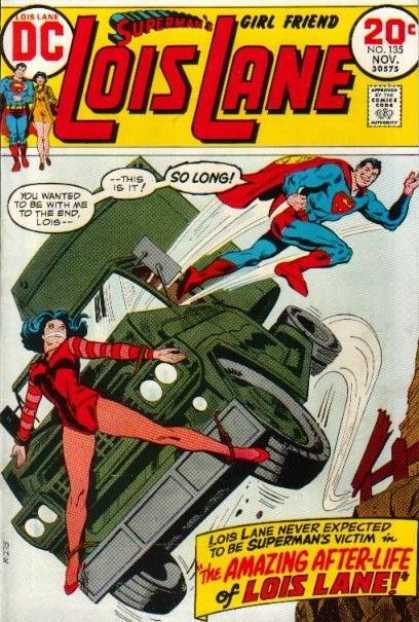 Realizing his hints were perhaps too subtle for a non-supermind to comprehend, Superman watched three hours of CourtTV and suddenly had a great idea. “‘Til death do us part” doesn’t really mean anything to a man who’s impervious to everything outside of space rocks and wizards.

“The Amazing After-Life of Lois Lane!” would imply that Supes was successful in carrying out his terrible deed. But let’s assume that somewhere in the process of killing his beloved that he slipped up: what can the police possibly do? He’s Superman. Do you think Sing-Sing will hold a man that can shoot lasers out of his eyes?

Reason #4: Superman’s A Tad Over Protective 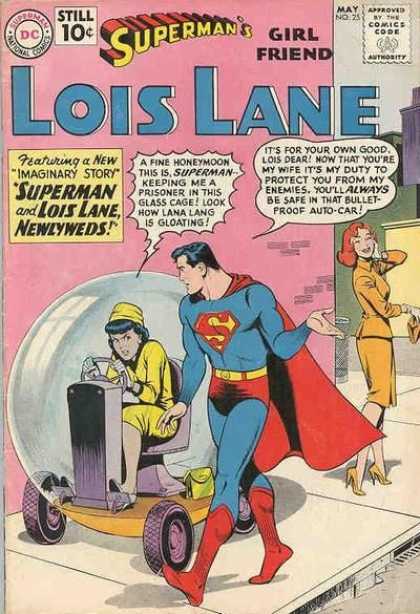 We’re pretty sure that every issue of Lois Lane is an “imaginary tale” because otherwise Superman would have to run out of vehicles to crush her with. In this riveting issue Lois finally seals the deal with her boy friend and is promptly placed in a mobile bubble for her efforts. The glass protects her from gunfire because I guess a man who deflects bullets can’t do that on his own. More importantly, however, it protects her from oxygen because Superman forgot to drill air holes in it. 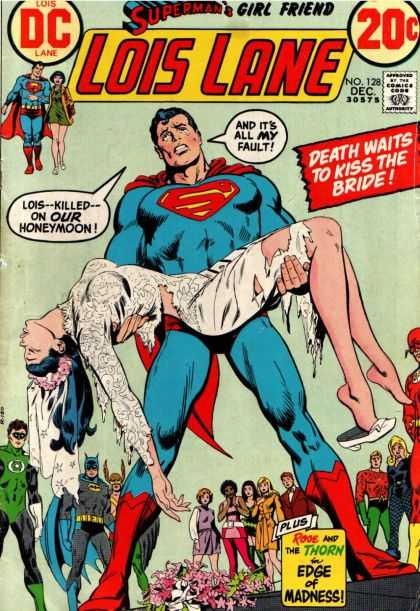 Apparently Lois got out of her bubble car and, surprise surprise, Superman accidentally killed her. You’d have to read the issue to see how one accidentally slays their wife but the torn dress implies either some super-sex act gone horribly wrong or that a herd of bison stampeded through their room at the Holiday Inn. While this alone is concerning we’re more concerned with why he felt the need to bring half the of the Justice League with him on his honeymoon.

#6 They Have Some Trust Issues 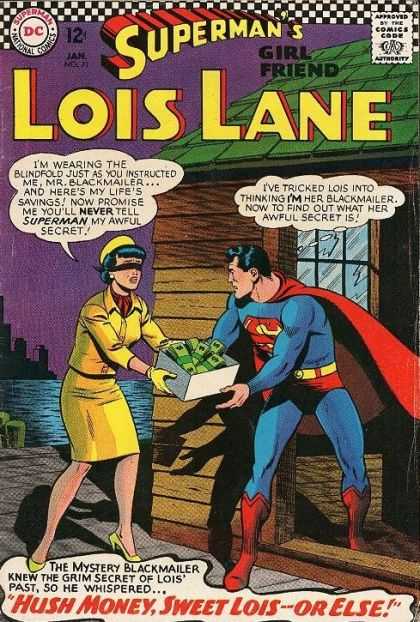 There’s quite a few layers to this act of deceit but we’ll try to cover them all as best as we can.

Also, Lois is dressed pretty sharp for someone who’s privacy is being violated. Just sayin’.

#7 Superman Tried to Murder Her In Space 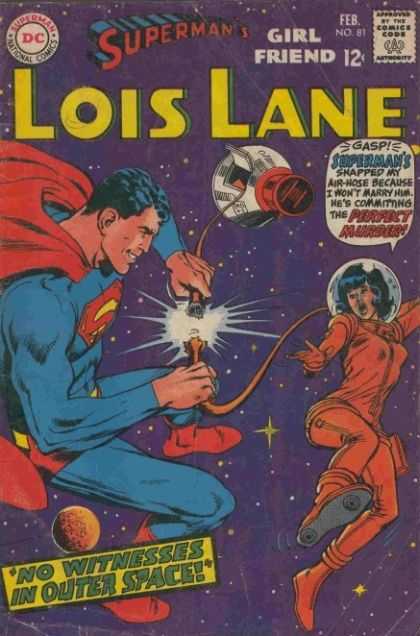 According to every romantic comedy ever, love conquers all. However, that nugget of wisdom doesn’t account for the cold vacuum of space. Nothing says “If I can’t have you then no one will” quite like the time honored tradition of space murder and Superman seems to have made a science of it. We can only wonder how he even managed to get her the proper clearance to become an astronaut in the first place, let alone how he’s going to explain her absence after the return mission.

Reason #8: Her Standards Are Kinda Low 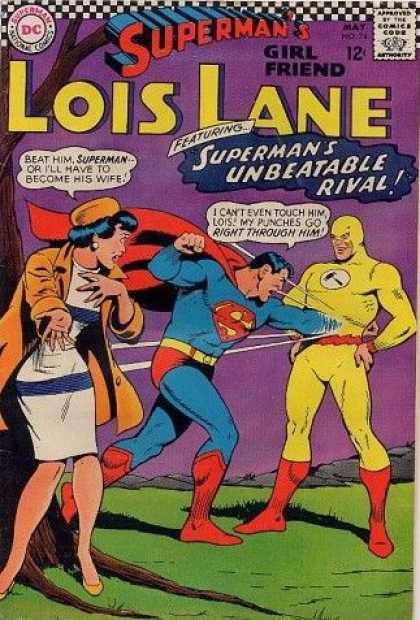 Fun fact: Lois Lane makes out with, gets killed by, or marries everyone she meets with a secret identity. She’s gotten so desperate for a husband that she only requires her suitor to meet one of two requirements:

Reason #9: Superman Thinks She is Stupid 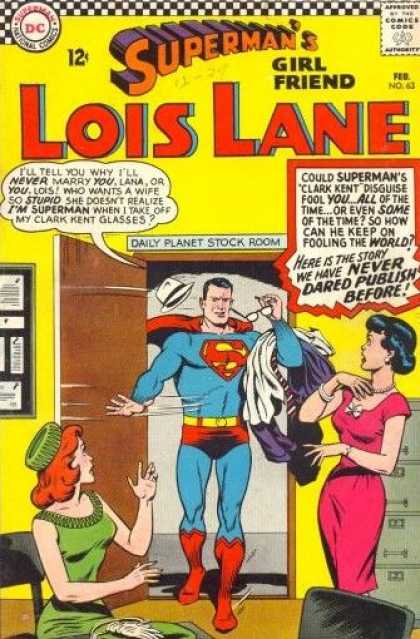 It’s pretty hard to not feel superior when you can crush a train car like a child’s toy accordion, but you simply have to draw a line somewhere and to be fair to Superman he has been giving Lois a free pass ever since they met. Still, he makes a valid point about the disguise. I’m pretty sure Stevie Wonder can put two and two together and he’s never even met Clark Kent.

Reason #10: Superman Is A Tremendous Asshole 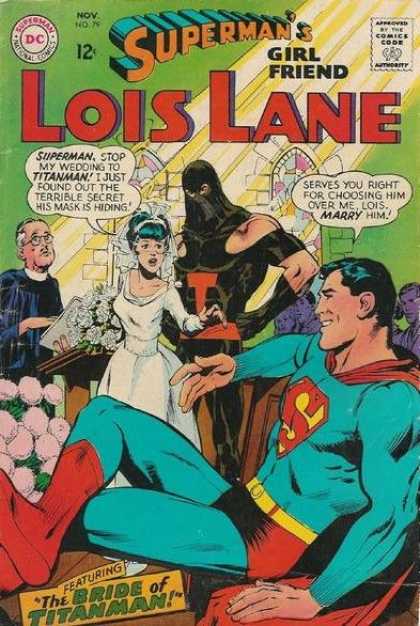 If two successful murders and one accidental murder didn’t make it readily apparent, we’ll go ahead and say it: Superman is pretty much an asshole. He’s spent much of his time marrying women who weren’t Lois Lane but can somehow find the victim complex within himself when she finally decides to settle for someone else. Who would have guessed that a guy in torn clothes and an executioner’s hood would be bad news? Superman seems pretty satisfied with her choice knowing full well that Lois is going to end up in pieces in Titanman’s basement. “And that’s why you don’t leave the bubble car, dear!”