Sports > Football > Is London Fletcher Hanging Up His Cleats?

Is London Fletcher Hanging Up His Cleats? 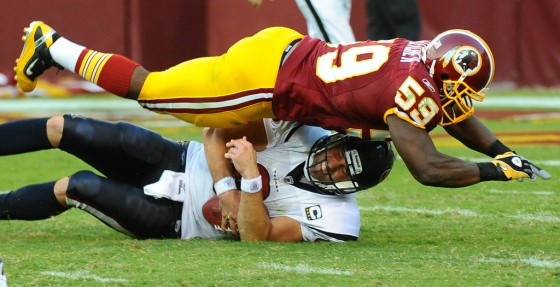 In a recent story on Comcast Sports, London Fletcher admitted he’s undecided about returning to the Redskins in 2013. A man who has played 240 consecutive games in the NFL is undecided about his future.

From his rookie year in 1998 with the St. Louis Rams, through his short time in Buffalo, to his celebrated career in Washington, Fletcher has yet to miss a game. He is the NFL’s iron man. And to play a position as physically and mentally demanding as middle linebacker makes it even a greater accomplishment. Of course, fans would give anything to have Fletch back on the field, leading the defense to another postseason run, but what else is there for this man to conquer?

Let’s look at his career highlights:

Fletcher is a cornerstone of the Redskins defense, team and public persona. He exemplifies what it means to be a stellar athlete, a team leader, a community icon and a beloved fan favorite. To say he would be missed is an understatement. To say that he doesn’t deserve to call it a successful career is disillusioned.

If he decides to hang up his cleats, it’s a well-earned retirement. Many opposing offenses would love to see it, and not a single Redskins fan, coach or player wants it to happen.