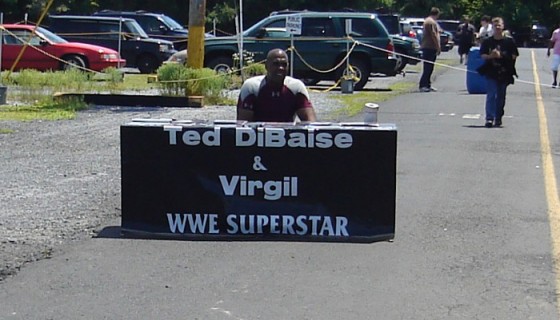 And he can't spell.

Remember former WWF wrestler Ted DiBiase’s bodyguard, Virgil? Sure ya do. He was the glorified valet who somehow parlayed years of humiliation into a lengthy wrestling career. Well, Virgil has been showing up at wrestling conventions and events like Comic-Con for years, pimping $20 autographed pictures. Believe it or not, there isn’t a very high demand for Virgil merch, meaning he is often seen sitting tucked away in a corner all by his lonesome (poor, poor, man).

Virgil’s stunning lack of star power has become a running joke on Sirius/XM’s The Opie and Anthony Show. So much so that one of the show’s producers, wrestling nerd Sam Roberts, took the liberty of starting a Tumblr page dedicated to the “Superstar’s” desolate public appearances, appropriately called “Lonely Virgil.” So, if you have any photos of your own showing Virgil looking like a sad, pathetic douche surrounded by zeros of fans, now is the time to share them with the world. Because if anyone deserves to be an Internet meme, it’s Virgil and his enormous member.