The Greatest Food Truck Owner Ever! 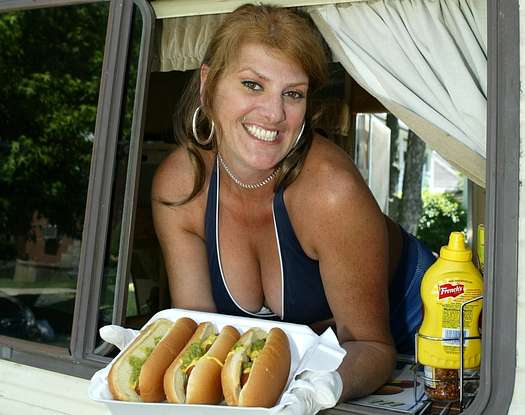 An undercover cop approached the [hot dog] stand Thursday and bought two hot dogs and water for $5 before the “specials” were announced.

Scalia took the cop back to her place and performed a striptease for $100 before unveiling the main course, police said.

“She agreed to manually stimulate him for an additional $50,” said Nassau County Police spokesman Kevin Smith.

Excuse me, sir. Is that a hot dog in your pants or are you just happy to see me? *drops mic, soft-shoes off stage*

The best part of this glorious tale is this isn’t the first time Chef Copulation has been arrested for offering sexy side dishes. Back in 2004, she and a cohort were pinched in a similar sting.

They advertised themselves individually as Roxy and Diamond and in tandem as “Double Delicious” until they were done in by an undercover cop.

Fantastic. And lest you think this chesty cuisinier known for displaying her ample bosom lacks tact, think again.