Sports > Fighting > Looking Back at the nWo, 15 Years Later

Looking Back at the nWo, 15 Years Later 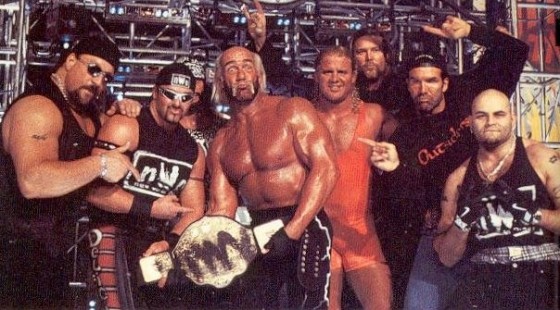 Its fun to think back to about a decade ago when professional wrestling was a TV ratings juggernaut, not the hot mess it is right now. Back then, Monday Night was must see TV for fans of all ages and all genders. No, the “Monday Night Wars” wasn’t subjugated to any one specific demographic anymore; Men, women, children…you didn’t have to look too far to find a diehard fan of the business. You’d go to the grocery store and see a Sting shirt here and a Stone Cold Steve Austin shirt there. Wrestling was a runaway success that I personally never imagined it becoming growing up as a fan. When you said you were a fan of wrestling, it was always immediately met with the criticism of “You know that stuff is fake, right?” Yes, I knew. It was entertainment. And to put it simply, I was entertained. But something happened in the late 90’s that would change the landscape of the sport forever; the nWo.

I remember it being late in May of 1996 and I was studying for my finals (I was still in High School). Having some noise on always helped me study, so I would turn on an NBA game or whatever was on. But with this being a Monday, I had on WCW Nitro. By this point, I didn’t really follow the program week to week, but if it was on and I was around, I’d watch it. But there was a match on between The Mauler and Steve Doll, so naturally I wasn’t really paying attention until I heard the audience in attendance going nuts. To my surprise, I saw Razor Ramon from the WWF (it was still called the WWF back then) making his way through the stands and eventually to the ring. He then went on to deliver the now famous “You want a war? You got one” speech to the WCW. Now this was before the internet had taken off and you could read everything that was going to happen on these programs and what was scripted or not. So no one knew if that was real or not, because as far as everyone knew, he still worked for WWF. 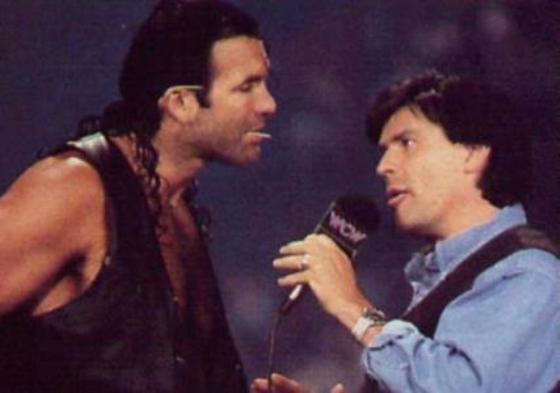 For the next few weeks, I watched religiously to see if anything else happened. And every week, Razor would show up for a few minutes to mess with play-by-play announcer Eric Bischoff and continue to tell him that a war was coming. But after a couple of weeks of that, WCW icon Sting confronted him and slapped the hell out of him. This made Ramon say that he had “A BIG surprise” for them next week. I was hooked.

Again, they never said his name or anything about the WWF, so no one knew if this was really an “invasion” or not. True to his word, Razor showed up near the end of the program to start more trouble. But this time he didn’t say a word. He simply pointed for Bischoff to look behind him. Then another shocker, as Diesel from the WWF was behind him and he gave a speech much to the same as Razor had by declaring war on the WCW.

For the next few weeks, the duo would show up and cause trouble, but never got in the ring. Finally, at the next pay-per-view, Bischoff confronted the two men and asked them if they were still employed by the WWF and they said no (turns out that this was because Vince McMahon was threatening lawsuits over it) and gave their names as Scott Hall and Kevin Nash. Bischoff gave them some lip and Hall punched him in the stomach and Nash power bombed him off the balcony and through a platform below. I seriously thought the guy was dead. It may be of the norm now, but that kind of stuff didn’t happen in wrestling up to this point. 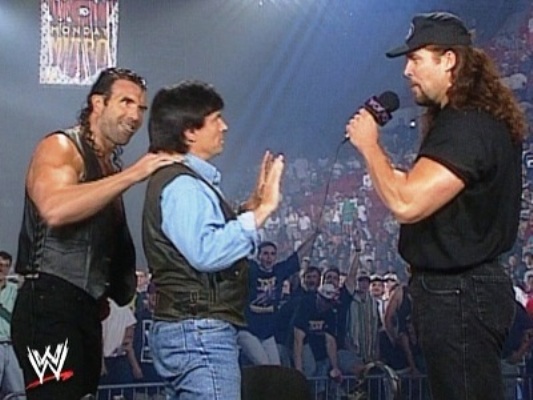 The Outsiders, as they named themselves, then started to talk about a “mystery partner” behind the scenes. Someone who was plotting every move for them. They challenged WCW to come up with three participants to challenge them at the Bash at The Beach pay-per-view. They chose Sting, Lex Luger and Macho Man Randy Savage. I was all in at this point and I decided to purchase the PPV with my brother, who was a casual wrestling fan if at all. But he too was intrigued by this storyline. When the show finally rolled around on July 7th, 1996, It was still only the two men against WCW’s trio. Mean Gene demanded to know who the third guy was but Nash would only comment “Just trust me, he’s here.” But the match continued on for around thirty minutes between the five men. Lex Luger was eventually injured and had to be taken off on a stretcher as the match went on. But the Outsiders were really taking over and just when they were about to win the match, who was coming down the ramp and towards the ring? Hulk Hogan!

The crowd went nuts as he climbed in the ring and did his patented tearing off of the shirt. The Outsiders jumped out of the ring as Hogan dared them to get back in there. The crowd was going bonkers and even I was having a moment of childhood memories and growing up a “Hulkamaniac. Then my brother said something that I will never forget. He said “Wait, do you think he’s the third guy?” I was like “Are you out of your mind?” Mr. Say your prayers and take your vitamins a bad guy? No way!” Sure enough, in the moments that followed, wrestling history was forever changed.

Hogan then attacked the helpless Randy Savage and Sting multiple times and The Outsiders came back in the ring as the three of them celebrated together. The fans, completely stunned, were about as silent as could be. Then Mean Gene came into the ring to get an interview and Hogan delivered quite possibly the greatest in-ring interview in the history of the sport. Give it a listen below.

And just like that, the New World Order was born. If you didn’t experience it first hand, you’re probably saying “So What? It was just another wrestling stable. What was so special about that?” Well, I’m here to tell you why.

Why It Was Important

Around the time it happened, the wrestling ratings for both the WCW and WWF were the lowest they had ever been. WWF had a death grip over WCW for years and no one could touch Vince’s promotion in the ratings. But when the nWo was born, fans flocked over to Nitro, which aired at the exact same time a Raw, to see Hulk Hogan as a heel.

Hogan had been off of TV for a little while because the Hulkamania thing had run its course, many believed. It was a tired gimmick that had gone about five years longer than it should have. Fans still loved him, but they were tired of it. He would forever be the ultimate face who always did right by the fans. This is why it was so shocking for him to tell the fans to “stick it, brother!” It was such a big deal that I remember the national news reporting that Hulk had “went bad.” It was flat out a homerun for the writers of the show. And for the next six months, the trio dominated WCW in what was dubbed a “hostile takeover.” They won almost every title and injured numerous opponents with their aggressive ways. And the audience went from jeering them adamantly to eventually growing to love the stable. Within a year, the crowd was littered with nWo shirts who were suckers for all of their catch phrases, such as “4-Life” and “Too Sweet.”

The real importance of this was that WCW was now dominating the WWF in ratings so bad that Vince McMahon decided that his program needed to change or he was going to bankrupt the WWF. Thus, the true Monday Night Wars began. 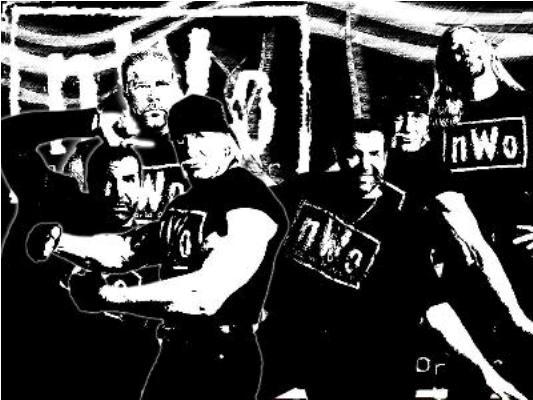 With both Nitro and Raw airing at the same time, something had to give. And for over two years, WCW won the ratings battle. But when the WWF ushered in the “Attitude” era, both shows became terrific. People, such as me, began to watch one live and record the other. WCW had the nWo and Vince created Degeneration X; both “heel” stables that the fans actually rooted for. WCW had Sting and Diamond Dallas Page, WWF countered with The Rock and Mankind. You get the point. It was a battle in ratings that got so nasty that both programs began to mudsling at one another on air.

The impact of the New World Order was so big that ratings for WCW almost tripled in a span of two years. All of a sudden, it was cool to like wrestling. Around the halls in High School you were seeing Outsiders and nWo T-Shirts. People were making the “4 Life” hand gestures and talking about who the nWo messed up the night before. 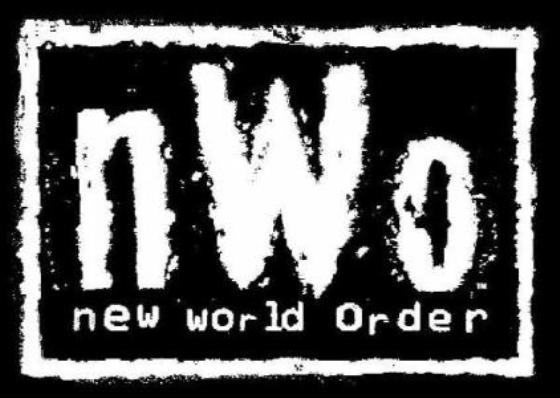 Sure, in the end, WWF regained control and eventually put the WCW out of business just five years later. But to deny the impact that the nWo had on professional wrestling is just foolish. They made the competition change its game completely just to keep up. People still make the 4-Life hand gesture. People still have the New World Order ring tone on their cell phones. And the group is frequently listed as #1 on most “Greatest wrestling stable of all time” lists. And rightly so. Who knows if WWF would have ever changed from their family friendly format to up their game had there been no nWo. Who knows if the ratings would have ever risen. Who knows if it would have ever become cool to like the heels? We may never know. But one thing we do know is that just fifteen years to the day of the official formation of the group, the current wrestling landscape is a mess without them. Often imitated, but never duplicated; the legacy of the New World Order will always be at the forefront of real wrestling fans opinions.