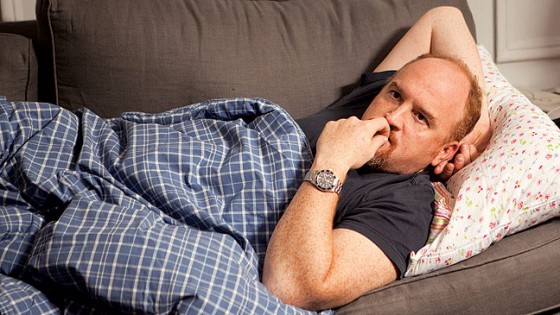 The above pic seems appropriate, because I’ll be striking a similar pose next summer without new episodes of Louie. FX is moving the start of Season 4 to May of 2014. WTF! At least we can’t blame the network suits for this head-scratcher. Apparently creator/writer/director/all-around awesome guy Louis C.K. requested the delay. From the man himself (via THR).

“I want season four to go somewhere new … I’m looking back to when I did the first season and the time I took to do the show and decide which directions to go in and I want that back again,” Louis C.K. told reporters. “I want a little breathing room.”

As much as I dug Season 1, I found Season 3 to be the best so far. There was a continuous flow that ran through the 13 installments and story arcs were given payoffs. It was still experimental and poetic and hilarious, but there was also a natural evolution of the Louie character.

“The last three seasons have been a surge of fun stories and it’s been great to share all the stuff and I want the show to keep getting better,” Louis C.K. said. “I want it to keep being something that comes from somewhere fun and important.”

Perhaps he feels it was becoming too much like a traditional comedy series. If that’s the case, then a lengthy break is a-okay with me. The last thing we need is Louie ditching stand-up to become a live-in nanny for his sister’s kids. On second thought, that sounds awesome.