LOUIE Season One on DVD 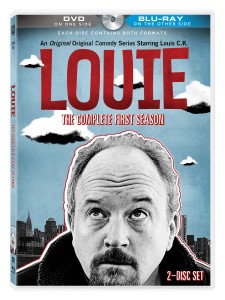 ﻿Many people like me love the great comedic mind of Louis C.K. In case you were living under a rock, Louis has a new comedy series on FX. The first season of Louie will be arriving on Blu-ray and DVD June 21.

In the first season you get to follow Louie’s adventures, and enjoy his unique perspective as he attempts to date, raise two daughters and live in New York City. FX has already renewed the series for a second season, which debuts on June 23rd.

Each episode spotlights C.K.’s hectic life as a successful stand-up comedian and newly single father raising his two young daughters. The series is shot using a single-camera and is a unique mix of Louis C.K.’s stand-up routine and scripted stories. Louis serves as executive producer, writer and director, and Dave Becky and 3 Arts Entertainment are executive producers.

Season 1 features all 13 episodes and bonus footage including deleted scenes, unaired and unrated comedy sketches, and commentary. Plus, the first season had great guest appearances from comedians Ricky Gervais, Pamela Adlon, Nick DiPaolo, Todd Barry and Mathew Broderick. To purchase the Blu-ray and DVD combo pack check out the Fox Shop. You can win a copy of season one by following us on Twitter. Here’s the trailer.