Machete on Blu-ray and DVD 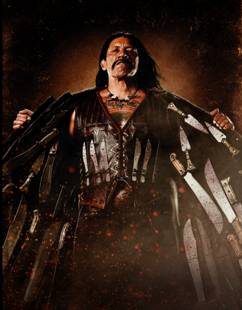 We here at Gunaxin had a the chance to speak with Mr. Badass himself Danny “Machete” Trejo. Check out the interview here and he also answers the Gunaxin 6Q! One of the things we talked about was his first film as the lead in Machete. The out-for-revenge, action-driven film is ready to serve up some justice with guns blazing and bloody blades slicing.  On January 4, 2011 you can get Machete on Blu-ray and DVD from Twentieth Century Fox Home Entertainment.

From director Robert Rodriguez (Grindhouse, Sin City), and featuring an all-star cast including Danny Trejo, Robert De Niro and Jessica Alba, comes an action-packed, bare-knuckled fistful of carnage! Set up, double-crossed and left for dead, Machete (Trejo) is an ass-kicking ex-Federale who lays waste to anything or anyone that gets in his path. As he takes on hit men, vigilantes and a ruthless drug cartel, bullets fly, blades clash and the body count rises. Any way you slice it, vengeance has a new name — Machete.

You can pick up Machete on a 2-Disc Blu-ray with Digital Copy and 1-Disc DVD from Amazon, or follow us on Twitter for a chance to  win a copy of the DVD! Check out the trailer below and Machete’s own PSA on texting!