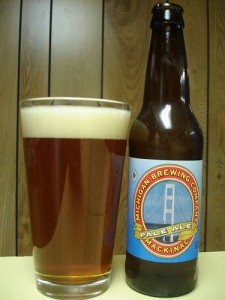 The Michigan Brewery 12-Pack variety box gives up another of its wares to the tune of a Mackinac Pale Ale. Though Michigan is pretty well known for a few outstanding areas and landmarks, the Mackinac Bridge that connects the mainland to Mackinac Island is indeed the finest of all.

Before I go on with the review itself, I figured I might as well drop a definition in here just in case some of the readers are a little foggy in the beer styles. A pale ale is thus (thank you Wikipedia):  Ale is beer that is brewed using only top-fermenting yeasts, and is typically fermented at higher temperatures than lager beer (15–23°C, 60–75°F). At these temperatures, ale yeasts produce significant amounts of esters and other secondary flavours and aromas, often resembling those of apple, pear, pineapple, grass, hay, banana, plum or prune. Pale ale is a term used to describe a variety of beers which use ale yeast and predominantly pale malts. It is widely considered to be one of the major beer style groups. All major ale-producing countries produce a version of pale ale.

There, now ya know. On to the bottle at hand. The pour is a golden-amber hue with a fine, soft head and an aroma that is heavily reminiscent of grass and a bit of banana. See? The description doesn’t lie! Okay, moving on. There is also a medium-bodied scent of bitter hoppiness, but not so much that it moves into an IPA territory, which is something entirely different.

The flavor is quite bright with just enough bitterness to let you know that it is a Pale Ale. There are quite a number of subtle background notes including some apple, a definite hint of grassiness, and a bit of its inherent maltiness. It’s crisp, peppery, and every swallow offers up that lacy head that lets you know right where you’ve sipped before. That’s fun. However, on an off note, though it is a fine Pale Ale, there really isn’t anything particularly special about it. It is, unfortunately, a bit too middle-of-the-road. No, not entirely a bad thing, as I’ve certainly had worse, yet, as well, I’ve had better. But, don’t let this deter you from drinking it, especially if you, too, are a beer drinker and like to try new flavors. Just don’t got into this one with lofty expectations. I would pair this with duck breast, or even game hens. Sure, why not?