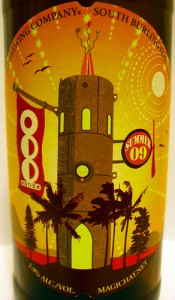 Info: “Golden in color and light in body, this low-hop bitterness ale is refreshing to drink and finishes with a subtle spicy complexity from a very unique Belgian yeast strain and Belgian candy sugar.”

I received a message from a commenter not too long ago as a retort for my reviews that often decry the inherent bitterness of IPA. Basically, what it boiled down to is that, “any decent beer reviewer who is not a fan of IPA’s is not a beer reviewer at all.” Look, I see the point since the basic underlying theme of truly enjoying an IPA is to truly appreciate the nuances and frequently brutal bitterness of everything a beer aspires to be. I call bullshit. Case in point: my brother is a registered wine sommelier and there are certainly wine types and flavors that he’s none too fond of, as are, I’m sure, many of his ilk. I love beer, end of story. The simple fact that I occasionally don’t love a hefty hoppy and bitter beer is in no way a reflection on the job I have. Why even bring this up? You’ll see.

One of a beer lovers greatest pleasures is the mighty 12-beer sample pack. There is no better way, shy of actually visiting breweries, to get a full supply and idea of some of that company’s finest samplings. So, I snatched up the Magic Hat Summer Sample pack for a paltry $12.99 (plus that pesky Michigan deposit I so loathe) and sat down with my buddy to test this sucker out. The very first beer I grabbed for no other reason than the bottle looked pretty (also because I’ve had Odd Notions from years past) was the very one I review for you now. And just to spoil the ending before I begin the actual verbal slaughter for those who have a less than track-worthy train of thought: It’s not so good.

Now here’s where I tie this in with my opening diatribe. This is so far the opposite end of the spectrum from a bitter IPA that it’s almost sickening. You’d think I’d really enjoy that. Well, you’d be wrong. Oh, sure, the masking color and pour are just stunning: crisp yellow-orange with a nice bit of lacing. But right off the bat like a knuckle sandwich is the incredible and irksome odor. No, this does not get the honor of being described as a ‘nose’, this mess is an odor fully completely. The beer smells like a demonic amalgam of gone-off grapefruits and far-too-hard apple cider. Basically, it smells like fruity garbage. And no, I don’t think the batch is bad nor even just one of the three samples of this flavor: they all smelled exactly the same.

Taste? Oh yeah, I guess you want that, too. Philistines. Unfortunately, it tastes precisely as it smells. But there’s more. Somehow, the spice mix and yeast additives coupled with whatever Belgian Candy Sugar is makes this beer taste like a drunk’s Christmas morning. It’s like a batch of Bad Santa. It’s Rudolph piss. Get the picture? Now I’m not one to pour out a beer regardless of it’s funk. I mean despite my utter distaste for this selection it would have had to have a spider actively swimming in it for me to dump it, so, ergo, I finished it. Much to my chagrin. I haven’t been this forlorn over a beer from a superb company in a long time. It makes me sad. Sorry Magic Hat, not a fan.

Though still potentially drinkable, it is a hard beer to get through. High hopes fall flat. Sad, really.