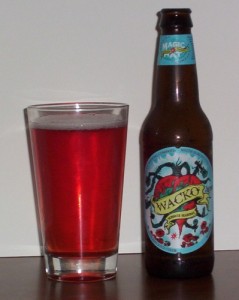 Info: “Crisp like the morning, cool like the evening, and quenching all day long. It’s the beer that dances to the beat of summer. Pop the top and let your summer loose. Wacko is the song of summer. A delicious, beet-red summer beer with a big, malty aroma, a subdued hop bite, and a clean, slightly sweet finish.”

Hey, I can totally get behind a beer that dares to step off the beaten path and wander through the ground less traveled. I hate boring, cookie-cutter flavors and I hate submissive and redundant mass produced swill. So, when I dipped into my Summer Selection 12-pack from Magic Hat, I was caught agape at the label proclaiming its ‘beet juice color’. Not for nothin’ is also the fact that I hate beets. Well, I was really hoping it didn’t taste like dirt.

This beer is perhaps the reddest liquid I have ever seen shy of blood and Kool-Aid. Beet juice? No shit. And boy oh boy does it have a nice creamy head and a nose not unlike a malty, tart, rich piece of beer-scented candy! Wait. Let us not forget that shooting to far away from the bitter IPA’s and even surpassing the chocolaty caramels of a Stout or Porter can, sometimes, be bad. But, I do love giving new beers the benefit of the doubt.

Wow. Subtle, yet distinctly complex myriad of flavors permeate almost too late for recognition on the first swallow. Nope. No beet flavor here, thank God. But wow, the miasma of malty, hoppy snap at the onset with a well-rounded clean-up of light and slightly sugary mouth feel is something new and different indeed. A dusting of bitterness encompasses the whole maelstrom of flavor and seals nicely in what could almost be described as a beer-coated taste bud flavor bomb. Smashing. This is the very reason why I like trying new and varied beers from a boxed collection: something new every time. I think I’d add this to a meal of something of the gamier variety like venison, duck, or even a fishier fish. Nice.

Rating: * * * *
Don’t let a beet-red beer that’s more amber than amber catch you unawares, this Wacko is on point.