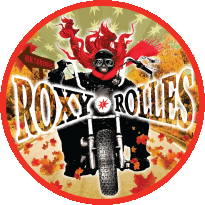 Info: (Direct from the site- and a fun site it is, too!) “As the leaves line the trees with colors bright, the Autumnal Amber Ramble comes into sight! Roxy Rolles pours in her wake foliage fallen and a perfect pairing of malt and hops.“

Here we have the second selection from the beautifully-named Night of the Living Dead 12 Pack, and it is a very nice looking deep-brown amber ale. Thankfully, as my love for the IPA style of beer grows in leaps and bounds, it’s nice to find the true Autumn brew in the pack is a quite hoppy style indeed. The pour is deep brown with a creamy, rich head that sneakily vaporizes into naught but a ring of lacing leaving it’s presence behind after every sip. The nose is a full-on hoppy barrage that screams the very nature of the type and gives you immediately the feeling of a nice amber to come.

The flavor is heavily hoppy, yet followed with a lovely nutty undertone. It’s slightly heavy -as many of the nuttier amber’s can be- but not so much that you take on that ‘full’ feeling after a few sips. It’s clean, crisp, and very tasty with its bitter back-of-the-throat that lends itself quite nicely to the over-all malty body. It instantly reminds one of Fall (which just so happens to be my favorite season) and gives one the feeling of hanging outside among the fallen leaves with just a nip of the chill air to come. Yeah, it’s real purty. The more I drink the IPA-style of beers, the more I have grown to appreciate them. I do believe that part of my initial distaste previously was my aversion to overtly bitter mouth-feel, but the acclimation of the flavor has come on strong, thankfully, just as newer beers arise. This is a darn tasty sample of the genre and I would highly recommend it with a rich soup, maybe a big brisket sandwich, or, so help me, a slice of pumpkin pie. Good stuff.