Gadgets > Other > Make a Grand Entrance With Personal Soundtrack Shirt

Wrestlers have them. Kings and queens have them. I think Ron Burgundy had them as well. So what do they all have in common you ask? They all have entrance music. Now you can too with ThinkGeek’s Personal Soundtrack T-Shirt. Turn heads and get noticed every time you enter a room. Not only does the T-Shirt come with a combination of 20 sounds and songs already loaded on the sound card, but you can change out the sound card or replace the songs. Since I am a Star Wars geek, I loaded the Imperial March from The Empire Strikes Back and Dual of the Fates from The Phantom Menace. 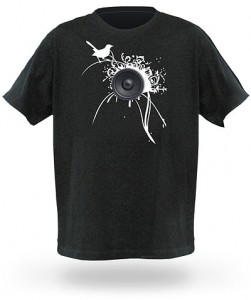 Scare people or play tricks on them with different sound effects that will come out of the speaker that is located on the chest of your shirt. The T-Shirt comes with complete instructions on how to load, change and loop music for your personal soundtrack. You can hook up your MP3 player/iPod to the speaker on the T-Shirt and share your music with everyone as you instantly become a human jukebox. All you need is male to male headphone cable (not included) to connect your MP3 player to the audio jack located on the battery box of the shirt. There is a volume control on the pocket remote along with 20 buttons to easily access your music or sounds that you loaded on the sound card. 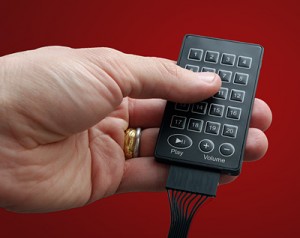 If you change the sounds on the original sound card and want to get the originals back, ThinkGeek is one step ahead of you. All you need is the link right here and you can download the original 20 sounds. (http://www.thinkgeek.com/files/soundtrackshirt/original-soundtrack.zip) The battery box requires four AAA batteries to power up your T-Shirt.

The included musical themes that come with the shirt are as follows: Royal Entrance, Sexy Time Theme, Disco Floor, Silent Movie Chase Theme, True Love, Scary Movie, Spy Mission, Super Hero Rescue, Western Showdown, and Game Show. The included sound effects are Cheering, Drum Roll, Cat Call Whistle, Laugh Track, Booing, Crying, “Wrong Answer” Buzzer, Rim Shot, Metal Air Guitar, and a Police Siren.  With all the awesomeness that this T-Shirt brings, you might think the shirt will never get dirty, and chances are you are right. But if by a slim chance you need to clean the shirt, you can. All you have to do is unplug the battery back and remote, peel the Velcro backed speaker, take out the cables stick that puppy in the washing machine.