Media > How to Make “Welcome to Night Vale” Perfecter

How to Make “Welcome to Night Vale” Perfecter

It became #1 most downloaded podcast on iTunes for a time in 2013. It’s been praised to the by everyone from the A.V. Club to Nerdist. It’s been so successful that it’s performing live shows nation wide, something podcasts don’t typically pull off. Mara Wilson of Mara Wilson Writes and Jackson Publick of The Venture Brothers have both played parts on it. Yes, it does seem that Welcome to Night Vale is close to as good as it gets when it comes to audio drama being released today

But still, there’s something that seems essentially wrong about this show about a friendly desert community where mysterious lights pass overhead while we all pretend to sleep. It hardly ruins the show or, as clearly indicated by the large and loyal following it has accumulated in the past two years, even hurts the show to a significant degree. Yet it’s an error that could, if corrected, could move Welcome to Night Vale away from near the top of audio projects to the upper echelons of fiction. And I would know: I’ve listened to, like, a whole radio show.

For the uninitiated, Welcome to Night Vale is about a town where basically every paranormal thing that can be thought up has happened, every tin foil hat conspiracy of a non-prejudiced nature is true (i.e., they’re aware there’s a World government, but it’s not related to a supposed international Jewish conspiracy or anything of the kind) and where the laws of science are often just ignored. This is all presented from almost entirely one host reading off local news, public service announcements,

Here’s a fan animation that gives a general sense of what Welcome to Night Vale is about which includes an audio sample:

Welcome to Night Vale is full of surprisingly funny elements and rich characters for how creepy of an atmosphere it creates. There’s flustered Mayor Pamela Winchell, Hiram McDaniels the five-headed dragon running for Mayor  (Jackson Publick) , the faceless old woman who lives in your home, the Sheriff’s Secret Police, Night Vale’s pen pals from the obliterated Soviet city of Nulogorsk that arrive at the desert town in a submarine, the hooded figures, the cat which floats in the bathroom named Khoshekh, the little girl who was born as a fully grown adult’s hand,   the complete lack of angels, the yellow helicopters, the Glow Cloud which became School Board President, Eternal Scouts whom adorn the town forever, the NRA who insist we’re all immune to bullets, the faceless old woman in your home (Mara Wilson) and of course Carlos, perfect Carlos the scientist who becomes the boyfriend of our humble narrator Cecil Palmer. And that really just scratches the surface.

As you can see from all the above, Welcome to Night Vale is kinda crammed full of weirdness and incidents. It’s full of conflicting parties with conflicting interests… that don’t conflict. Herein lies the problem this article is about: while Night Vale is full of good jokes and interesting ideas, there are so many of them that they start to get in each other’s way and make it impossible to get invested in any of them.

Simply put, there’s no way to define or make sense of Night Vale, and beyond a jokey context, that can be detrimental to properly enjoying it. How are we supposed to be creeped out by anything when it’s all a bunch of one-offs? How are we supposed to develop empathy for any of the characters when their interactions don’t make sense? There are roughly nineteen shadowy forces that seem to rule Night Vale in close competition with each other. How are we supposed to invest in any of them when their overabundance keeps calling into question how so many can possibly coexist in the same small town? I’m not saying that it’s impossible, but there should be some sense of the interplay between these various groups. That would be much more compelling to hear than Cecil read a non-sequiter public service announcement

Add to that, it’s hard to understand why a listener should be too worried about anything that happens to Night Vale anymore. How can anyone get too worried about the approaching army in episode #31 or the arriving submarine in episode #40 when we’ve already seen threats to Night Vale like the otherworldly children that came with the Eternal Scouts in episode #23 go away after during the weather segment? Anyway, Night Vale has been said to be a place where dying is a “privilege,” so it’s impossible to properly get a sense on how much danger to get a gauge on when the town’s actually in danger. And for a horror comedy of this type to work, you need that sort of underlying tension and suspense for the comedy to work against.

This might not seem like a significant problem so long as Cecil Baldwin continues to say funny things, but this is the sort of thing is exactly how a show becomes stagnant or spins its wheels. Eventually the formula of “something threatens Night Vale, but it’s essentially a non-issue by the end of the weather report” will make the show seem more like comfort food than an interesting and humorous way to bring yourself painlessly twenty-something minutes closer to death.

The writers are taking steps in that direction. For example, there’s the character Intern Dana. She’s had a relatively long-running story starting in episode 20 of entering the Dog Park and seeming to walk into another plane of existence in her attempt to escape. At one point, she walks out of a house that’s not really there. This has the very satisfying effect of tying into an incident in the pilot, where one of the first things Perfect Carlos is shown doing is monitoring that house.

Welcome to Night Vale has more than laid an exceptional groundwork for a very entertaining podcast. Now if its writers concentrate on doing more to build on the existing points and connect them in relevant ways that deepen our understanding of Night Vale without overexplaining it, it might have a truly Twin Peaks-type enduing legacy. Here’s crossing my fingers, all eighteen of them, that it delivers. 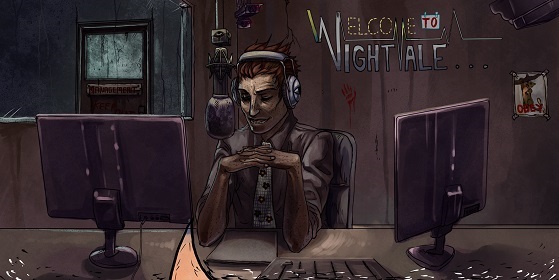