Malkin, Ovechkin, Kiss and Make Up 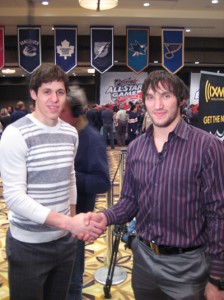 Ok, not exactly, but at All Star Weekend in Montreal, the two Ruskies exchanged words, shook hands and posed for photographs together.  The two former roommates were supposedly ‘fighting’ over some heavy checks Ovechkin delivered during a couple of Caps-Pens games, and it’s said that Ovie once hit Malkin’s manager in a club. Those Ovechkin hits caused Malkin recently to comment, “Ovechkin is a great player, but every time he hits me, I don’t know why.” Who knows. Who cares? Just play hockey, fellas.  The next time the Penguins and Capitals play each other (Feb. 22 in Washington), lets hope, for the same type of drama, Ovechkin won’t let up along the boards, smash Malkin face-first into the glass, and the ‘feud’ will be renewed.

But first… the All Star game. With Sid-the-Kid out of the Eastern lineup with an injury, it’s still not clear who is going to start in his place alongside Malkin and four Canadiens. Anyone other than Ovechkin, the reigning MVP and Washington Capitals super duper star, is bound to severely disappoint several fans. Then again, where were these fans when All Star voters were flooding the ballot box with votes for Crosby, Malkin, and four Canadiens? Maybe they’re the same folks in Florida who couldn’t correctly vote for Al Gore in the 2000 election.