Man Shoots Himself During Watchmen 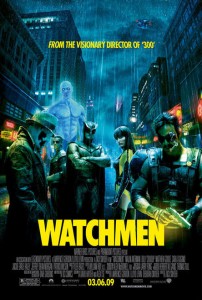 I haven’t seen the movie yet, but I hear the special effects are mind blowing. KMTR has the story of a twenty-four year old man who shot himself to death just after midnight on Monday, April 6th. The incident occured in a Regal Cinemas located in Eugene, Oregon.

The theater was about midway through a showing of Watchmen, when patrons began complaining to the manager of hearing a “popping” noise (not sure what gun would cause a pop). Authorities later found a man in the rear of the auditorium with a gunshot wound to the head. Some have speculated he simply had too much of the blue penis. Although, I must admit, I had no idea Alan Moore was only 24.

I guess this brings a whole new definition to the saying, “dying to see a film.”