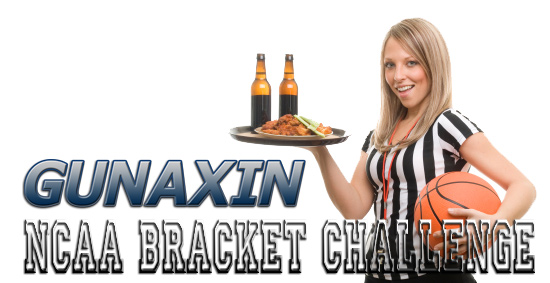 Gunaxin Sports is pleased to announce the return of our NCAA Bracket Challenge, however this year there will be a few changes. Instead of hosting our own competition, we have teamed up with several Sports Blogs to participate in something that is being called Blogs with Brackets.

The competition is being hosted by Yahoo and some of your favorite Sports Blogs are participating (I’ll update this later with a list). So this is your chance to compete against not only your friendly Gunaxin editors and staff, but also some of the biggest names in sports blogging. Prizes are still being sorted out, but bragging rights alone will be worth it in such a huge competition. So head on over to Yahoo and sign up for your team.

In addition we are pleased to announce that Gunaxin Sports will be participating in the Last Fan Standing Competition over at CBS Sports. We’ll be competing with 63 other Sports Bloggers for some pretty big prizes, so wish us luck. Once the Tournament begins you’ll be able to find some exclusive content from Gunaxin Sports on that site.