As a life long Cubs fan, please understand I hate the St. Louis Cardinals nearly as much as I hate Al Qaeda, so wanting me to say anything objectively constructive about the Deadbirds would be an arduous task.  Luckily for me,  St. Louis’ recent decision to hire the face of the darkest chapters in baseball’s history doesn’t really require me to pay St. Louis a lot of compliments.  So without further ado, we give you the new “Hitting” Instructor for the St. Louis Cardinals, the one the only, Mark McGwiroid. 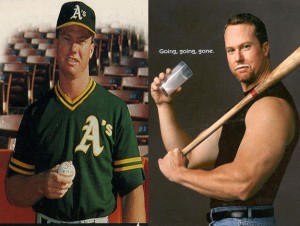 I'm sure Big Mac got those big muscles just by drinking lots of milk.

Forget for one moment about McGwire’s growth from skinny strikeout machine to steroid-inflated strikeout machine (I’ll get to that in a moment), but rather, consider his career as a major league hitter (italicize).  It doesn’t require a stat nerd and roto-league analysis of Big McRoid’s career stats to illustrate what kind of whiffing machine he was.  Even during his ‘brilliant’ * 1998, he struck out more than he drove in runs.  For his career, he fanned 1596 times, good for 29th on the all time list–100 more punch outs than Hall of Famer Willie McCovey in over 2000 less at bats! Had McGwiroid been healthy for his most of his career (which he was not), he would have easily been in the top 10 for career strikeouts.  Wouldn’t you think if you were hiring a guy to teach your guys how to hit (or to refine their swings), he could actually, you know, put the ball in play?  Or maybe the STL brass hired Big MacRoid to show some of the Cardinals young sluggers, Pujols, Rasmus and Molina how to ‘play the game the right way’…-*wink wink*  Well, that or teach them some good techniques for masking their backne.  But don’t take my word for it  check it for yourself. Stats don’t lie.

But forget for a second that he couldn’t really hit all that well. What is more pertinent to this story is that once he was accused (rightfully) of being a steroid fueled fraud.  He was called before Congress to testify about using PEDs and forgot that he could talk about the past.  Who could forget the “I’m not here to talk about the past” crack and then his subsequent silence when lawmakers peppered him with questions about using PEDs.  And you may ask yourself, “I wonder what Big Mac has been doing all these years away from baseball?”   The answer is, no one really knows.  He buried himself in a gated community in California for the last decade hoping that us idiots in society would somehow forget what he and a bunch of greedy asshats did to the game of baseball.

So now the man with the biggest ego (the mulleted Vegan Tony LaRussa) is bringing McGwiroid back in to baseball after years of silence and denial of his shady past.  As a Cubs fan I can only hope this experiment turns out as badly as I suspect it will and end in utter disaster for the Cardinals.  But perhaps even more importantly for me, the Cubs fan, St Louis is suddenly even more easy to hate, if that’s even possible. 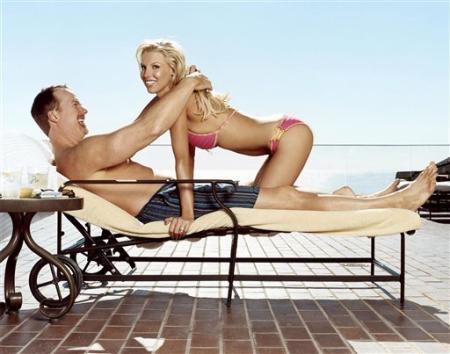 What was I saying again?