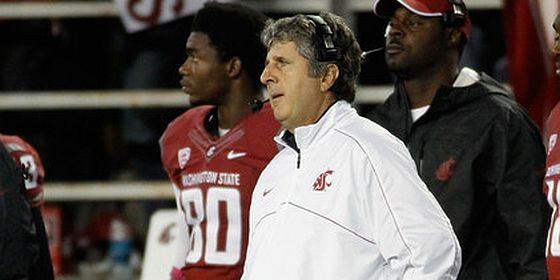 When Mike Leach was hired as the new coach at Washington State it was roundly applauded because Leach, and his aggressive coaching style, are fan and media favorites. His hiring was also seen as a comeback, as Leach had fought off accusations of abuse by former player Adam James at Texas Tech.

“It is with a heavy heart that I announce my decision to forgo playing football for Washington State University. I realize the school is saying that I am suspended for violating team policies and may return next week, but this is a lie. This is an attempt by the athletic department to cover up what is really happening in that locker room.

“It is been a privilege to be a Cougar, to perform on your field and wear the Crimson and Gray. I would like to thank Washington State University for giving me the opportunity to do what I love most, to play football and receive a quality education for the past three years. I’m grateful to the athletic department for the coaching, care and encouragement I have received prior to this season.

“This was going to be our year. My teammates and I were aspiring to be the winning team you deserve. Unfortunately for all, the new coaching staff has destroyed that endeavor. I believe coaches have a chance to mold players, to shape men, to create greatness. However, the new regime of coaches has preferred to belittle, intimidate and humiliate us. This approach has obviously not been successful, and has put a dark shadow on this program.

“My teammates and I have endured this treatment all season long. It is not “tough love”. It is abuse. This abuse cannot be allowed to continue. I feel it is my duty to stand up and shed light on this situation by sacrificing my drams, my education and my pride. I resign from this team. I am deeply sorry to those I am letting down. I am not a quitter. I was raised by my family, and many previous coaches to exhibit dedication and embrace sacrifice, but there comes a time when one has to draw a line in the sand.

“Lastly, I thank my fellow teammates, those who also have left the program this year, and those we are leaving behind. I hope our departure will bring awareness to the physical, emotional and verbal abuse being allowed in the locker room and on the field. I pray for healing and recovery for all those who have been hurt by this treatment

This statement is damning, and could prove to be the undoing of Leach’s brief run at Washington State. While players leave teams with hard feelings all the time, it is rare for a player to speak out so forcefully and as publicly as Wilson has here. For a player (and potential draft pick) with a remaining year of eligibility to put himself on the line with a statement like this there needs to be a thorough and public investigation of Leach’s methods at Washington State.