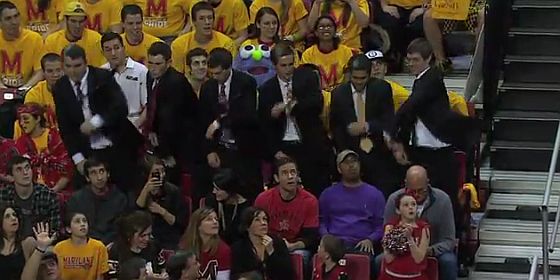 It was only a few days ago that we called out Duke fans for being morons with no sense of the importance of the game. It now appears that the condition is universal in the ACC, as fans of the Maryland Terrapins displayed their own goofiness during the team’s weekend upset of the Blue Devils.

While the Terps were on the court trying to stave off a trip to the NIT by beating the #2 ranked Blue Devils, the fans were showing off their knowledge of the latest viral video trends. During breaks in action the fans performed choreographed dance moves to multiple songs, including the idiotic Harlem Shuffle. Thankfully for the Maryland faithful, the Terps held on to defeat Duke despite the distraction from their own fans.

Oh, and 27 students managed to get arrested during “riots” after the game.

Keep being you, Maryland.