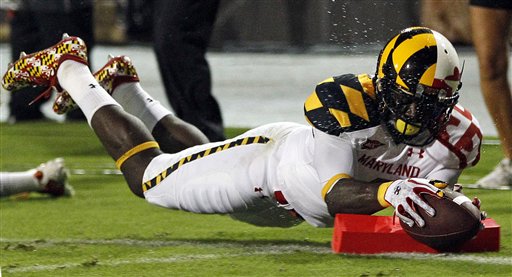 Love ’em or hate ’em, the new Maryland Terrapins uniforms have accomplished their goal. You’re talking about them. They are the very definition of remarkable, and judging by the buzz on Twitter and Facebook, they have become the hottest topic of the opening weekend in College Football.

For the record, I’m from Maryland, and consider myself a Terp fan, even though I went to another school in the state system. But you don’t have to be a fan to recognize that these uniforms are different. Obviously the school has taken a cue from Oregon, which isn’t a bad thing when you consider how successful that program has been recently. If you haven’t noticed, Maryland has fallen off the map in Football. They are starting the season with a new coach, and now a new look.

They apparently have 32 different uniform combinations with several different helmets. Without getting into a full fashion critique (some of them are just badass, you have to admit it) the uniforms are designed to do one thing, get noticed. For Under Armour, this means people are having a conversation about their brand, and for Maryland it does exactly the same thing. Being irrelevant and unnoticed is the worst possible thing in business, regardless of whether your business is selling sportswear, or delivering a college education.

The more people talking about Maryland’s uniforms, either good or bad, the more people who are aware of the school. They will especially get noticed, and likely appreciated by the younger generation. That means more opportunities for recruiting, and more important ultimately, enrollment. Maryland and Under Armour don’t care if you are saying their uniforms are the ugliest in College Football, they only care that you are talking about them at all. Mission accomplished.