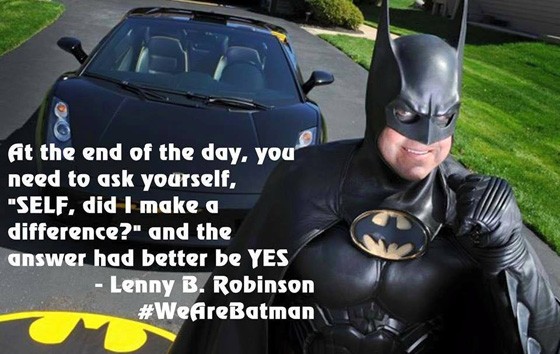 The world has lost one of its true Superheroes, as Maryland’s Batman, Lenny B. Robinson, was struck by a car on the side of the road Sunday night. He was returning home after a Car Show in West Virginia, an event he appeared at to raise money for his charity, Superheroes for Kids. Many in the world became aware of the Baltimore Batman after he was pulled over in his Lamborghini Batmobile in full costume for failing to display a license plate (he actually had a bat symbol license plate) and the dash-cam video went viral. You may remember this photograph from that incident : 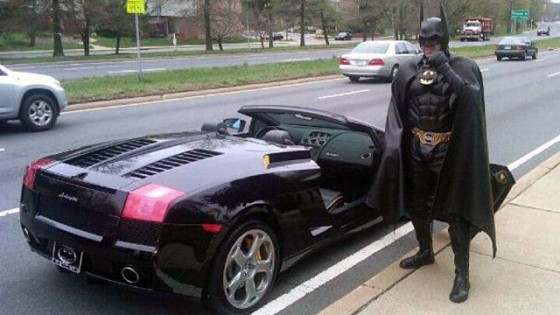 In this viral video world, most folks are content to laugh at a 30-second clip, make a snarky comment on social media and then move on to the next. However we knew there was something bigger going on here, and dug deeper to tell the full story of this caped crusader. It turns out he was on his way to visit sick children at the hospital, and had removed his license plate and replaced it with the bat symbol to preserve the mystery of Batman for the children. Lenny B. Robinson started dressing as Batman in 2000, and after selling the commercial cleaning business that he started as a teenager, he moved full-time into the business of helping and entertaining ill children. So while many know Maryland’s Batman as the seemingly crazy guy in the photo above, people in the local region know him as the real life superhero in the photos below : 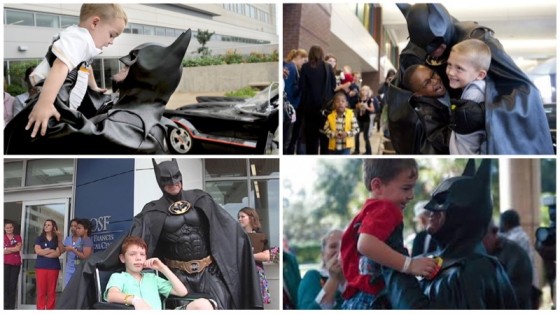 In 2012, we told you the story of Lenny’s new Batmobile, one he had ordered 3 years prior from a custom shop in British Columbia, Canada. He flew out west to pick it up, and then drove it all the way back to Maryland, stopping at hospitals along his route to meet children in need of his inspirational message. “Just as Batman fights battles, no matter how hard or long their battles may be, with strength of will and determination, there is always hope!” Lenny and his custom Batmobile were the subject of a recent segment on MotorWeek :

While visiting children in hospitals was his passion, Lenny and his Batmobile were popular attractions at local corporate events. He appeared at events like the Baltimore Grand Prix or Car Shows in order to raise funds for Superheroes for Kids, which he then used to support his work with children. On some occasions he was even known to make donations towards the treatment of kids for families in need. He also made dozens of appearances at local charity events, bringing joy and hope with him where ever he went. 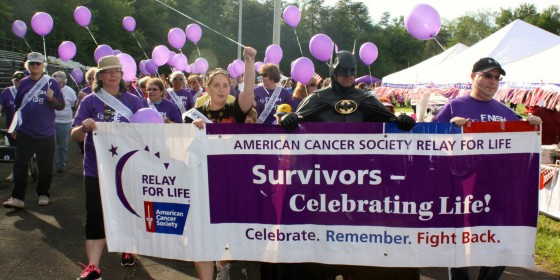 In 2014, I invited Lenny B. Robinson to the Relay For Life of North Anne Arundel County in support of the American Cancer Society. Our event had a heroes theme, partially because I intended to use that to entice Lenny to appear. It took some persistence, but finally two weeks before the event the very busy Batman responded and said he would make it happen. He had already booked two other charity events that day, but was able to squeeze us in the middle. On a sunny late spring day, Lenny B. Robinson drove his topless black Batmobile all over the state of Maryland while wearing his 35 lb. custom black bat suit in order to make all three appearances. He didn’t leave until every kid (young and old) had a chance to meet him and get their picture taken with the real life Batman. That day he left an impression on everyone, and helped us fight back against Cancer. 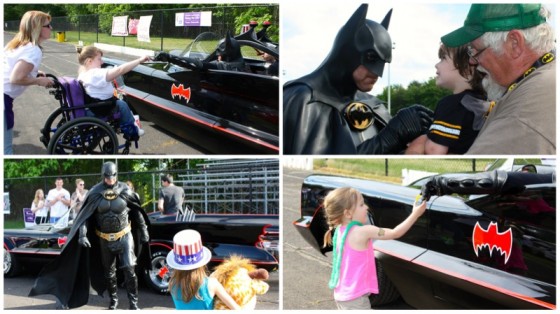 It was a special day for everyone who got to meet Lenny Robinson that day, but that day was his every day. I can’t think of anyone else who I’ve met in my life who has touched more lives than Maryland’s Batman. Today his Facebook page is full of tributes and sadness from the thousands of people who he has inspired from around the world. Each one of them has a similar story to mine, even if they never had the chance to meet him in person. He is proof that one man can make a difference, that there are much more rewarding pursuits in life than money, and that “with strength of will and determination, there is always hope!”

At the end of the day, Lenny B. Robinson made a difference. You can read more about his work with children and make a donation at SuperheroesForKids.org.