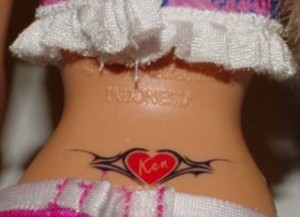 The Mail Online has the story of Barbie being given tattoos to mimic high-profile celebrities “like Amy Winehouse”. Although why anyone would want to be like Amy Winehouse remains to be seen. Mattel claims that such tattoos help bring Barbie (and her brunette equivalent Nikki) up to date. But parents aren’t convinced. One commented that, “It is dumbing right down – Barbie should be at the high end of fashion, not the chav end.” And if you don’t know what the “chav end” is, watch the video below.

As for Barbie’s tramp stamp, let me say I can approve only if they a make a Ken that can “hit the bulls eye.” Though I will say that Barbie is teaching girls a valuable lesson…always have your boyfriend’s name formed by negative space, that way you can tattoo it in after he dumps you.