McDonald’s is Really Stepping Up their Happy Meal Prizes 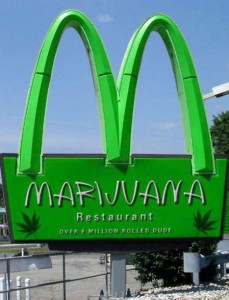 This story is almost two years old, but I must have missed it the first time around. For whatever reason, it seems to have second life these days and I’m going to pile on to the “better late than never party”.

Giving new meaning to the term “Happy Meal”, an employee in a Chicago area McDonald’s apparently stashed his stash, which included a lighter, a small pipe, and a bag of marijuana inside one of the patented McDonald’s children’s meals. This “prize” was in addition to the already included Shrek toy. The employee later stated that he forgot he had the items on him when he arrived for work and decided to hide the paraphernalia in one of the Happy Meal boxes until he could get it at the end of his shift. Oops on that one!

The dazed and confused employee was fired and a formal apology was issued to the family. Although I think the pot coming with the food is a winning combination. Also makes me want to try their Hash Browns. I’ll just leave it at this: Best. Happy. Meal. Ever! I’m also glad it wasn’t a condom, as that’s been known to happen as well. For those curious, Fox News has more details on the story.