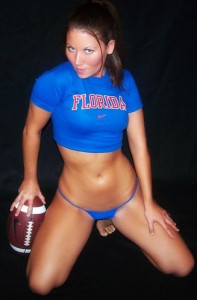 Have you met Gators Girl yet? She was featured prominently in our Florida Gator Girls Gallery, however not prominently enough for my tastes. Let me tell you a bit about her. Her name is Heidi, she likes Tim Tebow, she’ll be rooting for the Florida Gators tomorrow, and these are her pictures. Yep, that is about all I know. Enough for yah? If you want to buy some of these photos, I believe she sells them on flickr, but I don’t really know how that crap works. Probably not the low resolution garbage you see here, but some nice big photos that you could hang on your wall, or above your bed. She has tons more photos on her Flickr account, so go give the girl some money, and hopefully she’ll keep making photos.

Athletes in Costume for Halloween

The 20 Baddest Rivalries in Pro Sports