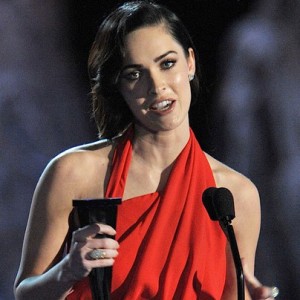 Megan Fox took home the Best Sci-Fi Actress award at the 2009 Scream Awards over the weekend. After walking on stage to Warrent’s “Cherry Pie”, the 23-year-old put to rest some rumors about her feeling towards the Transformers franchise. She started her comments with the oddly worded, “I don’t usually do this, but I just wanted to take a moment to actually say something genuine.” She then proceed to state that Transformers launched her career, and called herself “a very ordinary part of an extraordinary film.” One might wonder if she really mean an extraordinary part of a very ordinary film. The awards show airs on Spike TV October 27th at 10pm ET/PT