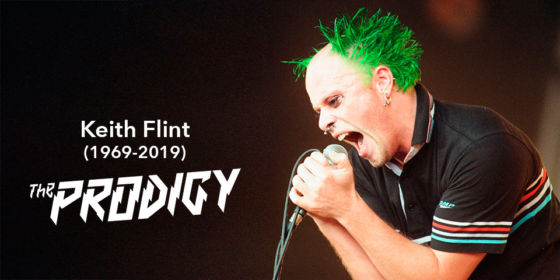 Editor’s Note : Republished in honor of Keith Flint’s passing today at the age of 49. The author of this feature is a huge fan of The Prodigy.

As someone who grew up and spent some of the best years of my life during the 90s, I happen to have really intense and emotional memories from that decade. I was ten when the decade began, and obviously 20 years old when it ended. In between lots of things happened on a personal level, and music was there every step of the way.

It’s quite likely that most of you can relate with the situation and no graphic details are needed to describe it all really. Music played a very important role in this transition from a boy to a teen and from a teen to a young man and the songs below are essentially a soundtrack to my youth. Together we will remember fifteen songs that are still haunting all of us who grew up back in that awesome decade, while for the younger this is a good chance to learn something new.

Keep in mind that I am a European guy, so some choices might surprise you. However the only criterion in the selection of this list was the airplay, the popularity, the influence, and of course some personal bias. Back before we all had iPods or playlists, this is what would have been playing on mine if they existed…

Strike it up is an all time classic dance song recorded by the Italo house music band Black Box and it played for at least five or six years straight in every club and radio around the world. It continues to be a classic stadium anthem to this day, and will always play at Madison Square Garden during New York Rangers home games when the team is winning late in the game.

Way before Eminem and only a couple of years after Vanilla Ice and the Beastie Boys hit the scene, House Of Pain became the hottest white hip-hop band of that time. Jump around became one of the biggest hits of the 90s while it remains an all time classic hip-hop song and was included in VH1’s 100 Greatest Songs of Hip Hop. It still makes us want to jump around when we hear it.

13. You Get What You Give – New Radicals

We don’t know where they came from before this song or where they went after that huge hit in the late 90s. All we know is that this song played mercilessly for a few years (and it still does) and helped the debut (and only) album of the group “Maybe You’ve Been Brainwashed Too” to become platinum in the US. The Edge, U2 guitarist, said that he wished he’d written that song. Now that’s a pretty badass compliment.

There’s no way in hell that you are a rock or video game fan and you have not heard this song at least once in your lifetime. This song literally stormed the charts on a global scale back in the 90s and in December 1998, BBC Radio 1 listeners voted “Song 2” the 15th Best Track Ever. Needless to mention anything else for all the video games lunatics other than “FIFA: Road to World Cup 98″. Brit Pop never left us suckers!

Way before Dr.Dre met Eminem, he used to work with probably the greatest rapper that ever lived, Tupac Shakur. Way before hip-hop became the dominant music genre that is today, it wasn’t that easy for rappers to dominate the charts like they do now; at least outside the US and especially in Europe. California Love not only dominated the charts and smashed some sales records, but it was also included in the 500 Greatest Songs of All Time by Rolling Stone, and ranks #51 on VH1’s countdown of the 100 Greatest songs of the 90s.

It’s quite impossible that you lived during the 90s and never heard this song, but apparently that is the case for some folks in the US. This song was the return of George Michael to the music scene after a long time off from the glory of the 80s, and he made sure to leave his mark in the 90s as well. It became platinum in Australia, gold in France, Germany, the UK and the US, while it was Top 10 in numerous countries around the world and #1 in the prestigious UK singles chart for a few weeks.

This song is the 90s, not just part of that decade. When you hear this song you get an automatic feeling of nostalgia for that decade and you tend to remember all these bad moments when you lost your courage and faith and all you had was Michael Stripe’s beautiful voice to comfort you.

One could mention all the accolades and certifications of the specific massive worldwide hit and justify the choice; Gold in six countries including the US and the UK, platinum and multi-platinum in as many and millions of sales globally, but let’s be realistic this “holy” dance song is epic regardless of the success it achieved on the charts. It was a basic dance theme in every club of Europe for nearly a whole decade, but didn’t have quite the same popularity in the US.

This is another song that defined the specific decade. The intro of this song is enough to introduce you to the 90s. The music video was filmed on West Pico Boulevard in Los Angeles, California, which makes it even more intense and unique considering the contrast of the video with the totally representative European/British sound of the group. For the history, the single was released in the midst of the Gulf War, and the word “attack” was temporarily dropped from the group’s name.

At the end of the decade we were introduced to an incredible phenomenon who was meant to dominate the charts and break every record during the following decade. Eminem is one of the most influential and powerful musicians of last decade, as the most awarded and best selling rapper of all time, but he got his start in the 90s. Back in 1999 he was nothing but a funny looking white boy who most experts predicted wouldn’t last more than a few months in the tough world of hip-hop. God, how wrong they were really!

While I’m not a fan of her music or her as a person, it would be more than unfair if I allowed my personal preference to exclude that massive hit from such a list. This is unarguably one of the biggest hits of the 1990s.

The most significant music genre that the 90s gave birth to in the US was undoubtedly grunge and Nirvana, or to be more specific their lead singer Kurt Cobain, became a mythical figure while alive; very rare for a rockstar. Smells Like Teen Spirit is not just a song, it’s an anthem for a generation of grunge fans.

This is Britpop at its best ladies and gentlemen. The decade introduced us to grunge as we already mentioned, but also Britpop and Electronica. It’s pointless to mention all the accolades and certifications of this song. The sound of it tells you (or reminds you) everything really.

2. I Will Always Love You -Whitney Houston

If the incredible voice and performance of Whitney (R.I.P.) is not enough to convince you that this piece of art belongs on a top 90s list then I don’t know what will really. Keep in mind that this hit is one of the ten best-selling singles of all time with sales of over 15 million copies.

Since I made this list I could easily say that this is my personal choice and you better suck it up. However I tried to play fair during the whole process and this won’t change now. Was I somewhat biased with this choice? Probably so. Does it deserve it though?

Let’s keep in mind that even though grunge and hip hop were big in the US during the 90s, while Britpop smashed the charts in the UK, Electronica literally dominated all over the world. The 90s was the decade of rave parties, video games, ecstasy and electronica. The Prodigy were an underground group which made totally anti-commercial music; they were something like the modern Sex Pistols. They were the perfect representation of global trends in music.

They popularized the underground breakbeat hardcore sound, while their dance-punk “musical theme” that was once described as “Rape of your ears and soul”, wasn’t as accessible to the masses as most of the artists included in this list. However the Prodigy have been credited as pioneers of the big beat genre, which managed to achieve (miraculously really) mainstream popularity in the 1990s and 2000s.

They have sold over 25 million records worldwide and “The Firestarter” is to this day their most successful hit ever. The group has won numerous music awards throughout their career, including two Brit Awards, three MTV Video Music Awards, two Kerrang! Awards, five MTV Europe Music Awards, and have twice been nominated for Grammy Awards. So considering all the factors, does the Firestarter deserve to get the #1 spot in this list? The answer is….HELL YEAH!