The Most Memorable Scenes from Game of Thrones Season 3 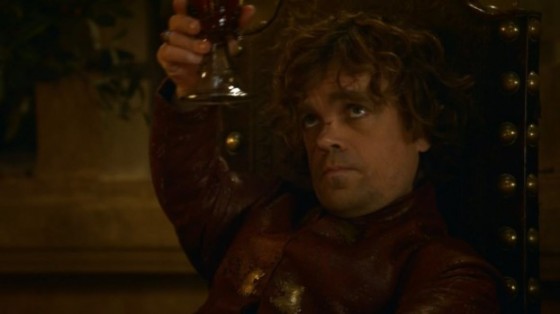 Season 3 of Game of Thrones concluded last night in rousing fashion, as expected. From a narrative standpoint, the third chapter was the best thus far, rife with cohesive plot progression, relevant character development, well-placed action and of course, grisly deaths. Ohhh, the grisly deaths. Sadly, we must wait another nine months to get our weekly fix of sword, sorcery and treachery. But there’s no crying in Game of Thrones (unless Theon is involved or a wedding is afoot), so now is the time when we raise our glasses to the most memorable scenes from the season that was. SPOILERS DEAD AHEAD!

The pleasure of watching two amazing actors engaged in verbal warfare makes this wonderfully written scene extra special. Charles Dance’s Tywin and Diana Rigg’s Olenna spar with the same amount of venom and bitterness as a divorced couple. In the end, Tywin gets his way, although it comes at the expense of being pointedly grilled with embarrassing questions from the eldest Tyrell.

From the moment Jon Snow and Ygritte locked eyes, this was destined to happen. If Snow’s Watch hadn’t ended already, it sure as hell did after he thrust his manhood between the fire-crotched Wildling’s legs. You can watch the whole scene elsewhere, but Ygritte’s O Face says it all, doesn’t it? Jon Snow and his magic tongue FTW! (Via)

Brienne and the Bear

Jaime’s personality makeover received another notch in the plus column when he displayed a bona fide act of heroism to save Brienne of Tarth from the voracious clutches of an angry grizzly bear. The inclusion of live animals is always risky, but director Michelle MacLaren blocked the scene in such a way as to make the danger factor palpable.

More Tywin Lannister is never a bad thing. This time his not-so subtle vitriol takes dead aim at his pipsqueak grandson, King Joffrey, who is none too pleased with his exclusion from the inner circle. Tywin, as only he can, manages to talk the boy down while insulting him at every step. George R.R. Martin’s writing is impeccably scathing. However, to Joffrey’s credit, he is the only one showing genuine concern about Daenerys and her dragons. Perhaps it’s simply his juvenile fascination with the creatures, but he in the right to query how serious a threat they pose.

All the Lord of Light mumbo jumbo can be a bit overbearing at times. Nevertheless, it is integral to the larger story and its religious significance did bring us this dynamite sword battle between Beric Dondarrion and The Hound. One point: Dondarrion must be a pretty shit*y soldier to have been killed six freakin’ times. Lucky for him, Thoros and the LoL are on speaking terms. Anyway, flaming blades, severed shoulders, and the dead rising makes for great TV.

When Varys repeatedly drops that Lord Baelish is one of the most dangerous men in the Seven Kingdoms, it seems like no one really believes him. Well, odds are If they listened to Littlefinger’s terrifying monologue about “chaos,” they would probably stand up and take notice. Aidan Gillen delivers each syllable of dialogue with a measured degree of nefarious intent. Close your eyes and listen to the words; they are downright chilling.

If Jaime is the heartless fiend we are led to believe in the first two-plus seasons of Game of Thrones, his story about how he came to kill the “Mad King” serves as a reminder that every man is more complex than he appears on the surface. His stunning and tear-filled revelation also tarnishes the once spotless reputation of Ned Stark, who comes across as a judgmental prick. That is, if the Kingslayer’s tale is truthful.

Deal Or No Deal?

Next on the Daenerys Targaryen barnstorming tour of Essos is the city of Yunkai, home to 200,000 slaves, which really draws the ire of the Mother of Dragons. And it so happens, momma’s toddler tarragons are the stars of this scene — one which Dany “negotiates” with Grazdan mo Eraz, spokesman for Yunkai, and someone who might want to rethink his strategy (and change his undies) after issuing idle threats to a woman with dragons as pets.

The highlight here is of course Tyrion getting plastered and once again humiliating his witless nephew. It’s scenes like this that provide rock solid evidence as to why Peter Dinklage wins all those Emmys and Golden Globes. An added bonus: Lady Olenna breaking down the new family tree is comedy gold.

The Hand of the King(Slayer)

The Kingslayer’s mouth finally wrote a check his ass, or in this case, his hand couldn’t cash. Non book readers likely didn’t see this coming. The joy Locke displays in removing Ser Jaime’s most prized appendage is both admirable and sickening. It’s a brutal act for sure, but on the Game of Thrones Season 3 scale of brutal acts, it pales in comparison to what occurs later on.

Episode 4: “And Now His Watch Is Ended”

The final segment of Episode 4 is what makes Game of Thrones the most ass-kicking hour on television today. Every time the slaver Kraznys insulted Daenerys in his native language of Valyrian, a slight and knowing grin would form on Khaleesi’s lips. When she takes command of the Unsullied army and reveals her native tongue to be Valyrian, note the gleeful glance translator Missandei flashes at Kraznys. It basically says, “Dude, you are about to get fuc*ed hard.” Oh, so very hard.

Episode 9: “The Rains of Castamere”

The poor dumb Starks. It stands to reason that if patriarch Ned was a political idiot, then his son Robb would be one as well. Once the lovesick teenage King of the North mentioned the name Walder Frey as a possible ally in his war against the Lannisters, a foreboding rain cloud darkened the sky. Like his father before him, Robb should’ve seen it coming. The honor and loyalty he held so true to his sigil were the very things he spat upon when he broke his vow to marry Frey’s daughter. Alas, another proud ambitious family is outwitted, outplayed and outlasted in a game they didn’t fully comprehend.

A Queen is Born

Dany’s legend is growing fast. A trio of dragons, check. Massive army, check. Experienced advisers, check. People’s unyielding worship, check. Yeah, this Stormborn chick is definitely going places. Westeros and the White Walkers better be on guard, because once she and her clan set sail on the high seas, all bets are off.