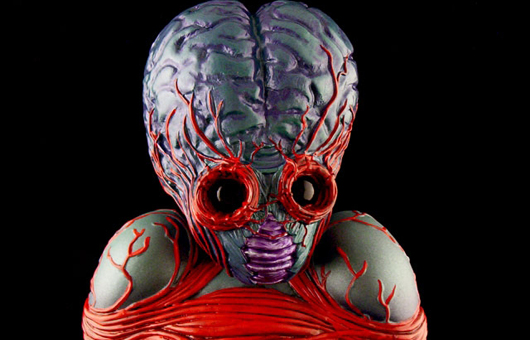 So, one of our billion dollar space probes -this one called Messenger- has made itself more or less useful. Now we finally have new pictures of… that’s right: Mercury! Here’s the skinny:

The first spacecraft ever to circle Mercury has beamed home the first-ever photo taken of the small rocky planet from orbit, showing a stark landscape peppered with craters.
NASA’s Messenger spacecraft snapped the new Mercury photo today (March 29) at 5:20 a.m. EDT (0920 GMT). The photo shows the stark gray landscape of southern Mercury, a view that is dominated by a huge impact crater.

And here’s the image of this desolate, drab, incredibly horrific images where I’m guaranteeing there are oodles of anal-probing aliens.

Oddly this picture looks really really familiar. And it just occurred to me that the eight or nine of you who have seen the Mystery Science Theater 3000 movie might already know what I’m talking about. There’s a scene in the movie itself that Mike and the Bots are spoofing (This Island Earth) where the characters are heading to Metaluna. Crow says, “This planet should comb it’s hair over its bald spot,” followed by Mike, “Ya know, that’s one butt-ugly planet you guys come from,” and Crow again, “Eww… it’s Michael Stipe’s head!”

This is the kind of humor we have here, folks. Also the planet looks like a giant boob.