Have a Merry Bewitched Blackface Christmas

You know how something can seem like a really good idea at the time and deteriorate? Well, if you watch enough Bewitched, you might run across an episode called “Sisters of Heart.” The origins of the show were actually noble. Elizabeth Montgomery and her husband had visited Los Angeles area high school Jefferson High. It was early in 1970 and they were touched by the plight of the students, especially the minority students, some of whom they stayed in touch with through graduation. They also took an idea that the students came up with and turned it into an episode of Bewitched. Montgomery even gave a special message to the audience before the show aired.

Everything was great and even somewhat noble. If you actually watch the episode 4o-something years later (it originally aired on December 24th, 1970) you might legitimately wonder how the episode ever got on the air.  “Sisters At Heart” begins with Tabitha introducing her friend (who is African-American) and McMahon-Tate wanting to entertain a new client. The client wants to investigate the home life of the people he is working with. The client is also a racist. Tabitha and her friend declare themselves as “sisters” and the African-American child answers the door when the client enters. The client assumes Darren Stevens has a black child. Tabitha’s friend then tells the client that she has a white sister. After the meeting, Tabitha tries to rationalize how they could be sisters. First, Tabitha makes both girls white. 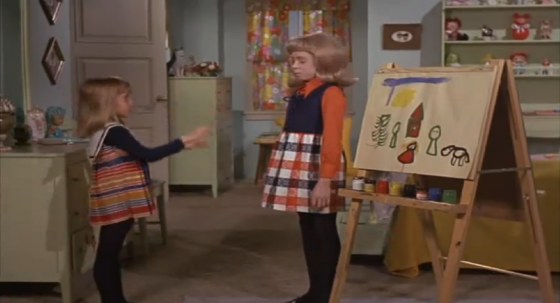 That doesn’t seem quite right, because Lisa’s mom would not recognize (and possibly not accept her) as being white. So, Tabitha ponders on racial strife and promptly changes both girls to black. 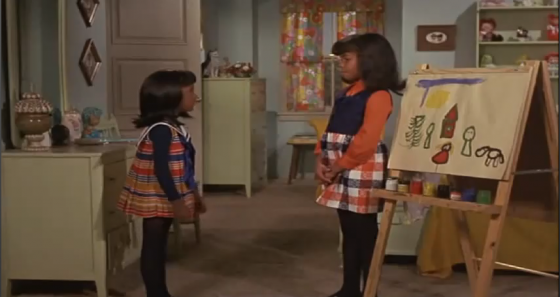 Again, there is the issue that an ad executive with a supernatural wife might not entirely understand how they had a black child. Finally, Tabitha uses her ‘wishcraft’ to make them sisters in skin somehow… which results in about the wrongest answer possible. They retain their skin but have polka dots from the other skin. Tabitha looks polka-dotted. Lisa looks like she had that Michael Jackson skin bleaching disease. 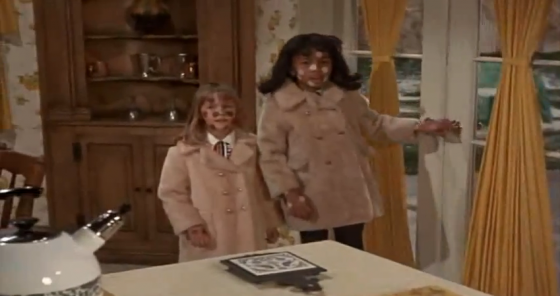 Yes, that is so much better. Now, the racist client decides to attend an office party at the Steven’s house to get the exact racial makeup of Darrin’s private life. The client is greeted at the door by Darrin and Lisa’s mom. This enforces the client’s belief that he has found a mixed marriage. The client brings Christmas gifts for the children. There is notably one white baby doll and one black baby doll. 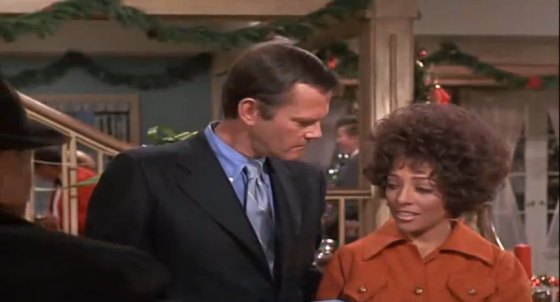 The magic is eventually reversed. The children are told that as long as you are sisters at heart, they don’t have to be sisters in skin. However, Larry Tate takes a moment of nobility to announce that he won’t do business with a racist even if he has “a million dollar account.” Darrin wants to teach the client a lesson, so he allows Samantha to make him, Samantha, and Larry appear black to the client. 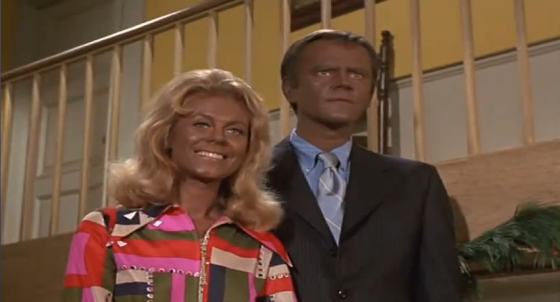 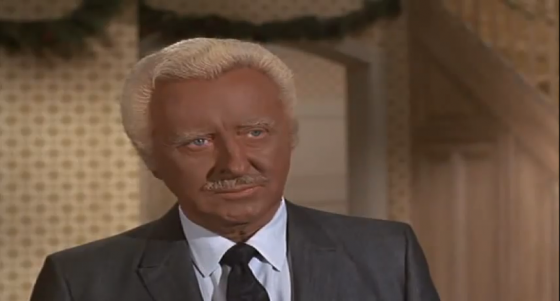 The client admits that he was a racist. The client decides to have Christmas with the Stevens as well as with Lisa’s family.  In 1970, rather than an outcry for showing blackface on network television, the show was awarded a special Emmy. These days, people would completely lose it if actors appeared in blackface on national television regardless of the reason. “Sisters At Heart” now stands as a rather unique piece of television history.