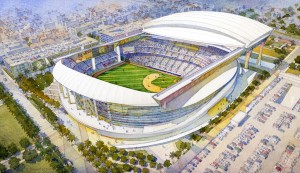 Yes, you read that correctly. The Florida Marlins finally received the go-ahead on their brand spanking new ballpark as the Miami-Dade Commission voted 9-4 to approve the $634 million stadium. It’s just the latest in a line of shakedowns of local officials for publicly funded stadiums, but it’ll keep the team in Miami for the foreseeable future (sorry Portland). The 37,000 seat, retractable-roof stadium in set to open in 2011.There are two caveats. One, the government must sell enough stadium bonds by July 1st (and who knows with this economy) to proceed with construction. And two, the team will change their name to the Miami Marlins (eventually).

That’s right, there’s now officially a Miami baseball team (or will be in a few years). Maybe Back to the Future (Part II) was right with their announcement that the Chicago Cubs beat Miami in the 2015 World Series. All that remains is that the Marlins move to the American League (and change their logo to a Gator). Just six more years until you see this Cubs fans: 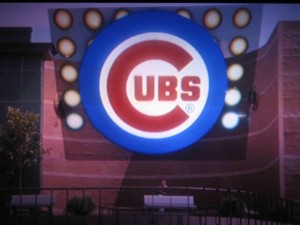