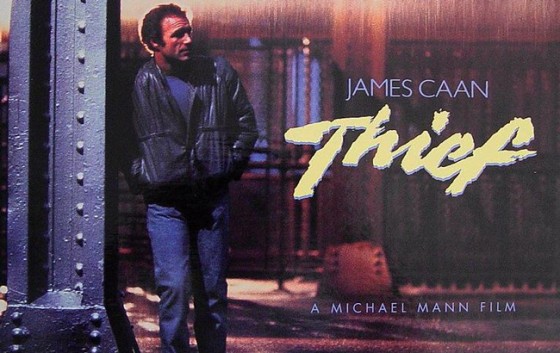 Heists, hitmen, and hot ladies. These are the key ingredients to a Michael Mann film, and over the years, he has used this formula to create superior crime pictures. Want realistic combat? Heat features what is arguably the best shootout ever committed to film, with cops and robbers spraying a hail of bullets throughout the busy streets of Los Angeles. Looking for an intriguing, memorable villain? Tom Cruise’s Vincent makes Collateral a viciously entertaining look into the life of a man who pays the bills by putting bullets into anyone who has wronged his employer.

If you’re a fan of true crime, Public Enemies is a well-crafted depiction of John Dillinger’s career and the early years of the FBI. Christopher Nolan cited Mann’s work as a major influence on the style of The Dark Knight. If all that wasn’t enough, he also unleashed Hannibal Lecter on the world in Manhunter (five years before the Anthony Hopkins portrayed the good doctor in Silence of the Lambs).

Don't worry, Brian. We'd rather be in the movie with Jodie Foster too.

For fans of the gangster genre, his films are as essential as The Godfather and Goodfellas. Populated with some of the most talented actors of all-time (Robert De Niro, Al Pacino, Johnny Depp, Christian Bale, just to name a few), one of the key elements that make Michael Mann’s explorations of the underworld so memorable is the fact that, in the end, they are all about character.

True, he’s a master of shot composition, he knows the importance of a strong musical score, and he can film a bank robbery so convincingly that you would believe he actually committed one. As a craftsman, the guy’s got a nearly Kubrickian degree of talent. But any good storyteller knows that none of that makes any difference if the people up on the screen aren’t interesting, if they are as lifeless as the scenery, and Mann is a damn good storyteller. 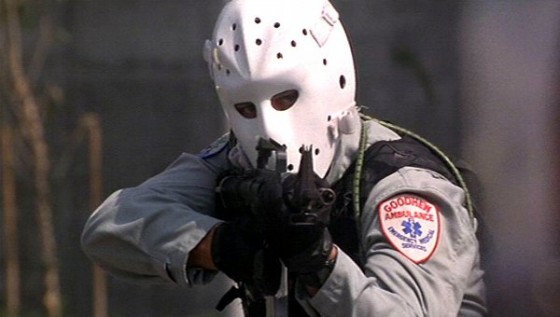 De Niro turns the "Heat" up.

When preparing a film, he often meets with actual criminals and law enforcers, working meticulously to understand what drives them to do what they do. Would Heat really be the classic that it is if it were merely the story of a generic, cookie-cutter cop on the trail of a typical Hollywood thief? Sounds like three boring hours punctuated by the occasional act of violence, but let’s be honest here: cinematic violence is only truly stirring when we care about the parties involved. This is a director that makes us care, and as his theatrical debut, Thief, proves, it’s something he’s been doing from the start.

Released in 1981, and often overlooked in discussions of Michael Mann’s career, Thief stars James “Sonny Corleone” Caan as Frank, a lifelong criminal who approaches his chosen profession with the expertise of a well-trained physician. Frank isn’t some over-zealous hoodlum looking for thrills; he is a serious man who employs the most sophisticated techniques he can in order to do what he does best. What he does best happens to be stealing jewels. Looking for a more stable relationship in his life, Frank reluctantly agrees to help a rival perform one heist, after which he will be financially able to settle down. However, Frank learns the hard way that his lifestyle isn’t the kind that someone can just walk out on. 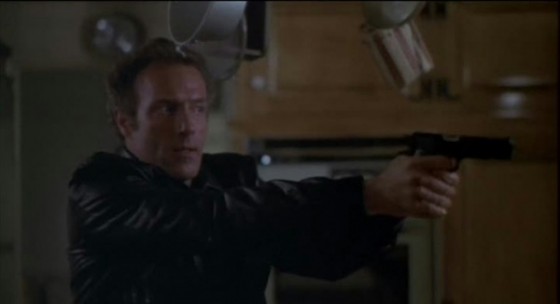 A veteran thief is lured into one final heist, but not everything goes according to plan. Okay, so that concept is about as original as “two hilariously (aka racially) mismatched cops are paired together on a major case, resulting in high comedy (aka mild amusement).” But in all honesty, Mann has never been the kind of director who was trying to invent the most unique plots. He knows that it’s not always what the story is, but how the story is told. With Thief, he displays an attention to detail that is often lacking in crime movies; he wants to know how these things are done, and he wants to put it up on film, so that his audience can have an authentic experience. Minutiae is important. The devil is in the details.

As a writer, Mann has consistently displayed a talent for composing insightful dialogue. True, it’s highly doubtful that any career criminals engage in as much open self-analysis as his characters do, but it is still based in reality, drawn from interviews he conducts with people who have actually done this kind of thing. This is reflected in James Caan’s terrific performance. Slightly toned down from his Godfather days, Caan’s Frank isn’t afraid of violence, but he’s not actively looking for it. He has thought a lot about his life and where he wants it to go, and he tries to refrain from acting out of raw emotion. If his business were different, the character might as well be middle-income bachelor looking to raise a family and put some money aside for retirement. 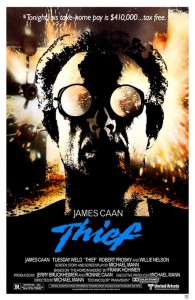 Thief doesn’t exactly represent the pinnacle of Mann’s skill as a director.It lacks the scope of Heat, the tension of Collateral. The film is certainly dated; the only way it could be a more definitive artifact of the Eighties would be if Tears For Fears was on the soundtrack and Caan wore a keyboard necktie. If the Hollywood Foreign Press ever gets the bright idea to throw a Cecille B. Demille Award in Mann’s direction, this movie won’t show up too much in the tribute montage. It was the first time that the director got a hold of the fancy toys that come with major studio pictures, and he wasn’t exactly as ambitious in the early stages of his career as he would be once his role in Hollywood was more firmly cemented. Still, fans of the crime genre looking to get a sense for how this particular director developed his skill should definitely check it out, as it certainly bears his signature. As a Michael Mann film, it may be a little lacking. As a heist picture in general, it’s a damn fine little movie.