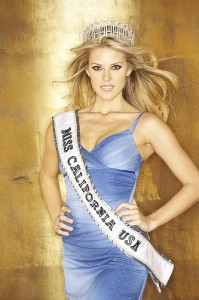 It’s been an interesting ride for swimming hero Michael Phelps. He’s had a bizarre post-Olympic experience where people reported on his every move like it really mattered. I know people appreciated his accomplishments in the pool, but I have doubts that they really cared that he was attending a Baltimore Ravens game or appearing on an episode of Entourage. And that’s just the tip of the iceberg. His fling with Las Vegas waitress Caroline “Caz” Pal was big Internet news, and his fling with a marijuana bong was international news. I’ve never seen a swimmer gain more notoriety for exploits out of the pool. And now he’s landing back in tabloids, this time for an on-and-off relationship with Miss California and Miss USA Runner-Up (plus former Pad Squad member) Carrie Prejean.

If you’re not familiar, Prejean’s been a lightning rod of controversy ever since the Miss USA pageant last weekend, where she made anti-gay comments in response to a question from openly gay rumormonger Perez Hilton. You can see the video of the question and answer below:

The comments have been attributed to her loss in the finals to Miss North Carolina and ignited a number of responses, including by Hilton who lashed out at her with some not so kind words. Prejean’s gone on to defend her comments and also claimed that her sister is a gay rights activist. Whatever, I’ve gotten too far off-topic. Now that Prejean is hot news, she’s somehow dragged Phelps back into the limelight. You just can’t keep the man away! Here’s some more photos to see what Phelps saw in her: