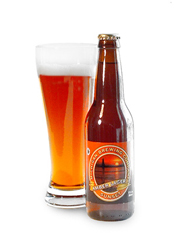 I love these multi-packs offering up three or four choices of different flavors of beer each from the same brewery. To me, getting to taste a multiple of beers without having to buy a bunch of packs; you couldn’t ask for a better way. And, since I’m smack in the middle here of South-Western Michigan, I do have access to quite the surplus of microbrews. Yup, I’m lucky.

Once opening the bottle of this particularly icy brew, I was hit immediately by its rich aroma so often associated with Amber Lagers. Now, in general, I’m not a big fan of Lagers as they tend to be overtly similar to one another and not exactly tasty, per se (The Dark Lagers really are superior). Now when they offer up an Amber, well, that’s a Lager of a different color. Literally. Pouring from the bottle into the glass offered up a nice, crisp head that faded within seconds. It’s color was as Amber as you could want in something rather lite; not as reddish brown as other Ambers, yet equally as pretty as certain others, still. Amber is a nice color picking up light and making it seem like something theater light operators would use to set the mood in the old times.

As with many of the other Ambers, the flavor is quite balanced with its hops and malt; neither overpowers the other and it hangs on with a nice, clean, wheaty mouth feel with very little aftertaste. It honestly reminds me of what Michigan Autumns would taste like with almost oak leaf notes and a slight throaty woody-fruity follow through. And that, readers, is quite nice indeed. According to its profile on the site, it goes particularly well with seafood, chicken, dried aged cheeses and, the one I can really picture it with, Lamb Stew. Yes, though I have none handy, I could easily see it cancelling out some of the inherent gaminess of lamb and its rich stew sauce. I’ll have to try that.
Rating: * * * 1/2
For its Run-Of-The-Mill Amber Flavor, but indeed equally for its reminiscence of ‘hometown Autumn’.