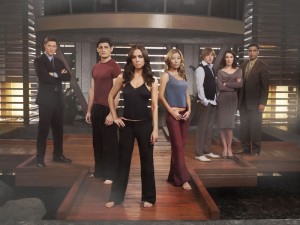 It’s the time when the TV networks shed the crappy TV shows that weren’t good enough to survive the season (their ratings weren’t high enough, anyway), and replace them with some shows they weren’t sure about at the beginning of the year. That’s how it used to work anyway, and yes there are a few cases of that, but in recent years the networks have cultivated a crop of midseason shows that premiere there every year. Shows like 24, Lost and American Idol.

I’m disappointed in the amount of reality TV making their debut in midseason, but in the midst of all that there are a few I’m looking forward to. Shows like Joss Whedon’s Dollhouse, Lie To Me, Cupid, The Beast, and if I had Showtime, The United States of Tara. Here’s the full list of shows making their series premiere in the near future in order of premier date.

Game Show In My Head – January 3 (CBS) – This is Ashton Kutcher’s newest show. According to IMDB:

“Host Chris Kattan sends contestants out onto the street, armed only with a  tiny earpiece, and gives them wild tasks to complete with unsuspecting bystanders and all of the action is captured on hidden camera! If a player can make it all the way to the final task, they have a chance to win $150,000!”

Homeland Security USA – January 6 (ABC) – If you haven’t guessed this is a reality series centered around the United States Department of Homeland Security. It covers subjects such as Airport and Border security, and intercepting contraband.

Howie Do It – January 9 (NBC) – Howie Mandel stars in this new reality series, which involves practical jokes similar to candid camera or Punk’d but the cameras aren’t hidden.

The Beast – January 15 (A&E) – The Beast stars Patrick Swayze as a veteran FBI agent training a rookie agent. According to Wikipedia:

“The Beast, starring Patrick Swayze and Travis Fimmel, centers on an unorthodox but effective FBI veteran, Charles Barker (Patrick Swayze), who takes on a rookie partner, Ellis Dove (Travis Fimmel). Barker trains Dove in a hard-edged, psychologically driven approach towards undercover work, where a moment’s hesitation can lead to death.”

The United States of Tara – January 18 (Showtime) – Toni Collette stars as Tara, a mother of two confused teenagers, who also happens to have Dissociative Identity Disorder.

Lie To Me – January 21 (Fox) – Tim Roth (Resevoir Dogs, The Incredible Hulk) plays a behavioral scientist how works with the FBI, local police, and even individuals, who claims he have tell when someone is lying from their face and body language.

Trust Me – January 26 (TNT) – Eric McCormack (Will & Grace) and Tom Cavanagh (Ed) play two best friends working as creative partners at a Chicago ad agency. Their creative partnership is put to the test when McCormach is promoted becoming Cavanagh’s boss.

“In Dollhouse, Eliza Dushku plays a young woman named Echo, a member of a group of people known as “Actives” or “Dolls.” The Dolls have had their personalities wiped clean so they can be imprinted with any number of new personas, including memory, muscle memory, skills, and language, for different assignments. They’re then hired out for particular jobs, crimes, fantasies, and occasional good deeds. On missions, Actives are monitored internally (and remotely) by Handlers. In between tasks, they are mind-wiped into a child-like state and live in a futuristic dormitory/laboratory, a hidden facility nicknamed “The Dollhouse”. The story follows Echo, who begins, in her mind-wiped state, to become self-aware.

Beyond Dushku’s character, the show will also revolve around the people who run the mysterious “Dollhouse” and two other “Dolls”, Victor and Sierra, who are friendly with Echo. Although the Actives are ostensibly volunteers, the operation is highly illegal and under constant threat on one end from Paul Ballard, a determined federal agent who has heard a rumor about the dolls, and an insane rogue Active on the other.”

Kings – March 19 (NBC) – NBC describes Kings as “an inspiring exploration of the timeless David vs. Goliath Struggle”. Set in a modern city David Sheperd rescues the king’s son setting event in motion that will eventually bring peace. This show seems to mix modern with medieval fantasy, who knows if it’ll work.

Cupid – March 24 (ABC) – Cupid is a revival of the 1998 series of the same name although the setting has been changed from Chicago to New York. According to Wikipedia:

“Like the 1998 series from which it draws inspiration, this series is about a larger-than-life character who may or may not be the Roman god of love — Cupid — sent to earth to bring 100 couples together before he is allowed to return to Mt. Olympus. Whether by fate or other circumstances, Trevor Pierce (Bobby Cannavale; character was originally Trevor Hale) is under the care of psychiatrist and self-help author Dr. Claire McCrae (Sarah Paulson; character was originally Claire Allen), whose own work is often based in romantic relationships. Claire’s philosophy on true love is that it’s the result of building friendship and compatibility. Trevor, by contrast, views it as heat and passion conquering all.”

The premise reminds me somewhat of CW’s Valentine, but I hear that Cupid might actually be good. 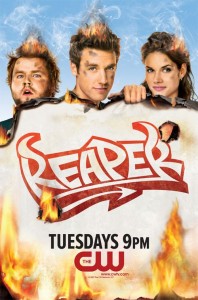 There are quite a few series making their season premiers half-way through the 2008/2009 TV season. USA’s returning with three of their irregularly scheduled programs, Monk, Psych, and Burn Notice. Both HBO and Showtime have season premiers for their shows on the same night. Battlestar Galactica is back to complete their final season, and season two of Reaper is finally going to make its appearance.

24’s 7th season premiers on January 11th with a, typical of 24, 2-day 4-hour premier event. Fans of 24 have been waiting a year and a half for this new season, with only a 2 hour transitional movie to tide us over. Hopefully, this new season can make up for the down time, and if I know Jack Bauer he’ll stop at nothing to make it happen.

Friday Night Lights’ 3rd season premiers on NBC on January 16 after airing on Direct TV channel 101. Friday Night Lights was a critical success on NBC but the ratings didn’t match up (some say this was due to its erratic schedule). After NBC canceled the show Direct TV snapped it up and began airing the 3rd season on October 1, 2008.

Lost’s 5th season premiers on January 21st. It’s said that in this season the Oceanic 6 need to make their way back on to the island. Season 5 will be Lost’s second to last season, and will consist of 17 episodes. We’ll see what kind of answers the writers will give us this season.

Scrubs is returning for it’s 8th and final season on January 6th. It’s airing at 9PM on ABC after it’s controversial switch from NBC. It’s said that the tone will be similar to the first few seasons of the show. JD and Turk are back and you know it’s going to be a great send off. ABC has been releasing Scrubs webisodes on their website, check one about the new interns out below.