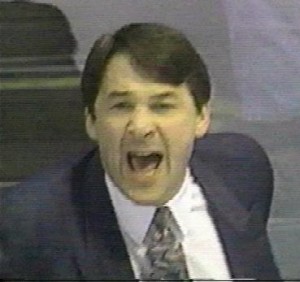 This afternoon I was at the Capitals vs. Penguins nationally televised game, covering it for CapitalsOutsider.com. Following the game, as I was waiting for the elevator, Mike Milbury of NBC walked up close to me. So I figured I could ask him about the comment he made during the 1st intermission, that upset many Capitals fans. I haven’t seen the video, but as I understand it, after Crosby scored two goals in the 1st period, Mike stated something to the effect of, Sid came into this game saying “Hey Ovie, I’m still your daddy”

So after Ovechkin scored a hat-trick and brought his team back from a 3 goal deficit, I thought it would be interesting to get Mike’s take on Sid being Ovie’s “Daddy” now. Mike didn’t appreciate the question, and immediately called me an asshole. He then proceeded to berate me for “being a jerk” and asking a question about a joke he made when the game appeared to be under control by the Penguins. Now I’m not sure if this is just Milbury’s usual personality, or if he was just upset after witnessing the Capitals comeback victory in overtime, but he seemed to be in a fairly foul mood.

At this point, I pulled out my Flipcam and gave him the opportunity to repeat himself:

UPDATE : Original video was edited and cropped. I received an email from someone asking to be removed from the video, which I have done.

Once the camera was rolling he wasn’t so loose with the words, so I turned it off and began to walk towards the elevator. Admittedly I stepped in front of him, however I was certainly waiting before him, and after he called me an asshole, I wasn’t feeling too generous with my space in a quickly filling elevator. Apparently I should have left the camera recording, because after I stepped in front of him, he pushed me from behind. Seriously, he pushed me from behind into a crowded elevator and expressed distaste for my positioning in front of him. He instigated the contact, I turned around and I think it is safe to say we both engaged both physically and verbally until some others present separated us. I don’t really recall what was said at that point, or how much each of us was pushing. In the absence of people pulling us apart, we would have probably fought.

Honestly, I was just asking Mike a simple question, however I really had no idea of his history. I didn’t realized I was asking a question of “Mad” Mike Milbury and that a simple question would cause the man to assault me verbally and physically. Apparently the guy has some anger issues :