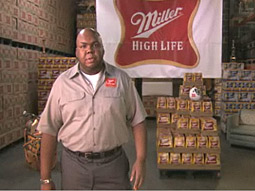 The people at Miller have decided that paying $3 million for a 30-second commercial makes as much sense as putting sauerkraut on a doughnut. So instead they’ve come up with a series of one-second ads to air during the big game. It’s part of Miller’s strategy of selling High Life as a good beer that’s a great value. And great value isn’t laying out three million dollars for a commercial, at least not when one second is enough to get the message across. Because Anheuser-Busch has exclusive rights from the NFL to run beer ads during the Super Bowl, Miller is forced to buy air time on local NBC affiliates throughout the country. Maybe you’ll catch the ad, but there’s a chance you’re not in the right market.

Miller hasn’t leaked any of the chosen one second ads, but you can see some of the rejected ones on 1secondad.com. Or you can watch the clip below, as thanks to the magic of YouTube they’re available right here. Featuring actor Windell Middlebrooks, you can see him make brief exclamations, such as “bean dip” and “Miller Time.” Also on the site is a 30-second teaser spot for your enjoyment. We’ll see if the ads created by Saatchi & Saatchi are worth it, even at 1/30th the cost.
Rejected Ads